What are cinemagraphs? In this article we show you a recent broadcast feature made up entirely of cinemagraphs and we also look at how they are made using FCP and Motion.

If you watched the BBC coverage of the final of the Snooker World Championship over the Bank Holiday weekend in the UK, you might have seen the black and white 'Time' feature. If not, take a look at the piece which was made up using cinemagraphs.

Eagle-eyed readers will have spotted Stephen Fry sitting in the front row of the press seats!

Our site editor Peter Wiggins in conjunction with cameraman Colin Nuttall and producer Tony Davies decided to make something different for the last show of the competition. Peter spent 17 days editing on the sporting event in Sheffield and describes the process of making cinemagraphs. The finished piece took a day to edit.

We had been looking for a way to make an interesting time and stress feature for the top of the last show at the World Snooker Championship. The idea of using cinemagraphs was talked about long before the actual event, but what exactly are they and how are they made? I hadn't seen anybody use the technique for broadcast and there was very little information published on the internet.

If we look at the Wikipedia entry it says. 'Cinemagraphs are still photographs in which a minor and repeated movement occurs.' They also give the naming credit The term "cinemagraph" was coined by U.S. photographers Kevin Burg and Jamie Beck, who used the technique to animate their fashion and news photographs beginning in early 2011.

Take a look at the photographer's website for some great examples. So how do you take this idea and translate it into video? All existing tutorials used Photoshop, but I was sure we could achieve the same effect using FCP & Motion.

It was obvious that video would have to be shot, frozen and then various elements of the picture animated or left to run in real time. Therefore two or more moving objects are needed in the frame for the effect to work.

On the Snooker we were using Final Cut Pro 7 and Motion 4, but these techniques would be the same for FCPX and Motion 5. One slight difference is that we were laying out the entire clip on the FCP timeline, making a still for testing in the edit against the voices and then sending the original clip into Motion. With FCPX the entire clip would have to be taken in from the finder.

First step in Motion is to duplicate the clip and the containing group, then toggle off the visibility of the clip in the top group. 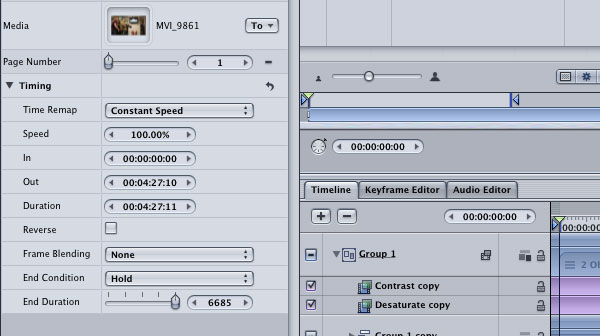 Then by using the in/out timing controls in the inspector of the bottom clip, bring down the duration to 1 frame to the exact freeze that you require. Set the end condition to 'Hold' and then drag the clip out again. This will then freeze the clip at the selected frame for the duration of the project. The scrub filter could be used, but I felt more at home with the frame I wanted to be frozen positioned at the top of the timeline.

The clip and group can then be slid back to the start. Here you can see the freeze extending from the one frame.

Toggle the top clip's visibility on and the bottom clip off. Then draw a mask over the top clip using the bezier tool and drop that into an image mask. You will either want to draw around the action you want to move, or by using the invert control on the mask, reveal what you want to be frozen. 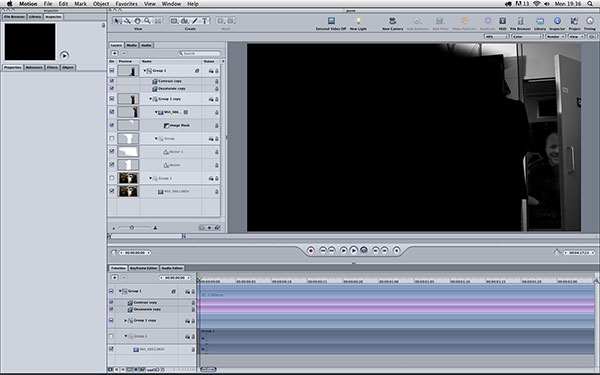 Then make all the layers visible and test out the mask. The mask control points may need to be animated to move around an object. This can be done by selecting and moving the points to edit when the red record button is on. The cinemagraph of the cameraman raising the camera and the crowd frozen needed a complex animating mask as the lens hood overlapped moving people.

To add a more photographic feel to the composition, we added two filters. One to remove the colour and the other to add contrast. You will need to apply the filters to a new group that contains all the moving and frozen groups. 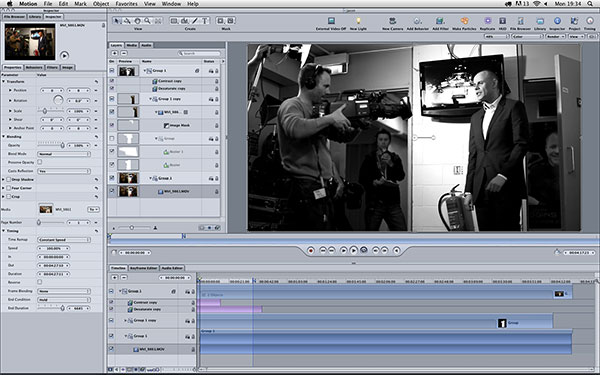 Back in FCP, the embedded Motion project or an exported render can be used for the next stage. After putting the cinemagraph into its correct place on the timeline, a small zoom in or out can be added. In the motion tab, aim for end keyframes placed at 100% and about 104% to add just a hint of movement to the overall effect.

We also added a spotlight plugin effect from Noise Industries' FxFactory to give a bit of shading to the cinemagraph. A vignette would be too clumsy and darken too much of the image.

So to use a well worn gameshow phrase: 'That's all there is to it.'

One of the keys to getting a good cinemagraph is to shoot it correctly in the first place. Here are a few tips.

1) Shoot progressive even if you are delivering an interlaced result. This will allow the background still to be frozen without having to be deinterlaced and therefore not losing half the vertical resolution. A DSLR is ideal and for the Snooker shoot we were using Canon 5D mkIIs.

2) When the subject has a person that is to be frozen, get them to be as still as possible. Even though you will freeze the result, it avoids unnecessary lighting changes and extra masking.

3) Use a high shutter speed to freeze as much of the action as possible and use a small aperture to get as much as you can in focus. Shallow depth of field looks lovely, but the effect looks better when the frozen and animating elements are sharp.

4) If you are using a movement such as the water through the presenter's hands, get them to move very slowly backwards away from a start position so that movement doesn't encroach over the original starting position mask.

5) Cinemagraphs are a lot easier to make if the frozen and moving items don't overlap. It's all possible with some good masking, but keep it simple with hard edges and basic shapes.

6) After filming the action, keep rolling and get the subjects to move out of frame to make a 'clean plate.' This will come in very handy to mask out any stray movement or shadows. The first clip of the players leaving the auditorium was made from 3 masked cutouts overlaid on a background without them.

And finally a big thank you to the producers who had the confidence to let three guys loose to make a feature based on a very bad description of a great idea.