We're deeply indebted to FCP guru Jon Chappell for sitting down and going through the audio filters one by one to see what each one does. The second part of his two part guide after the break.

This is the second part of the Final Cut Pro Audio Filter Guide. Part 1 covered the Audio Units that ship with Mac OS X and if you haven't read it, it's available here. This part will cover the audio filters that ship as part of Final Cut Pro.

This guide is intended to inform Final Cut Pro users of the options available to them for fixing bad sound.

Now, one thing you may have noticed is that there are often duplicate filters such as AUBandpass (an Audio Unit) and the built-in Band Pass Filter. So which should you use? Well, for a start, bear in mind that some of those filters have the same function but different parameters. I would generally advise you to pick the built-in filters over the Audio Units whenever possible, as they tend to use up fewer system resources. 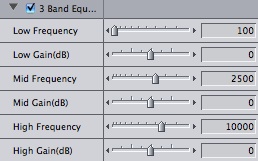 This allows you to take three separate bands (low, med and high) and adjust the gain up and down individually. I personally prefer AUFilter (in the Apple folder) because it gives you a bit more control and allows you to adjust 5 bands.

This is useful when you need to boost the bass of a voice or improve a flat-sounding voice.

This will allow a range of frequencies on either side of the center frequency to pass through and reduce (attenuate) frequencies outside this range.

If you don't understand the above explanation just play it by ear or use the AUBandpass filter.

The Compressor / Limiter reduces the volume of sounds above the threshold amplitude. This is a useful way of minimizing the difference between two subjects talking at different volumes or making sure that the audio fits within the limits of the playback device.

Obviously this reduces the volume of the overall audio so Preserve Volume rectifies this (although I find it is often then too loud). Attack time refers to the time it takes for the filter to decrease the volume once it has detected a frequency with an amplitude above its threshold. Release time refers to the time taken for the filter to increase the volume again once the high amplitude frequency has finished playing. Higher values allow for a smoother and less noticeable response but set them too high and the compressor won't respond quickly enough. This is something inherited from live audio mixing where you don't know what's coming next. Setting the threshold to just under your preferred limit allows time for the compressor to lower the volume in anticipation for a louder sound once the threshold is reached.

Sometimes you may experience a DC current leakage through the mic, causing noise in the recorded audio. A DC Notch filter will remove the DC offset component which you probably need a degree in audio engineering to fully understand. It has no parameters.

This is one of the lesser-used filters FCP provides.

This one obviously adds an echo. Effect Mix allows you to mix the echoing audio with the original in order to better blend it in. Effect Level controls the volume level of the echoes (but not the original audio). Brightness controls the degree that the echoes will overlap. Feedback controls how long each echo will last and delay controls the spacing between each repeat.

It is worth noting that the echoes will be abruptly cut off unless you lengthen the audio clip or fade it out.

A noise gate is a more extreme expander that will completely eliminate frequencies below the amplitude threshold. This can be achieved with high ratios (e.g. 10).

This is a simple filter that raises or lowers the volume of the audio. It is added automatically to clips when you use the Modify > Audio > Apply Normalization Gain command.

This will attenuate (reduce) low frequencies below the threshold. This is the same as a Low Shelf Filter. Use the Q slider to modify the bandwidth (width of the frequency range).

Useful for cutting out low frequency noise such as the rumbling of traffic or very low notes in a deep voice.

This will attenuate (reduce) high frequencies above the threshold. This is the same as a Low Pass Filter. Gain allows you to adjust the volume of audio that passes through the filter.

Useful for filtering out high frequency noise such as buzzing on the soundtrack. 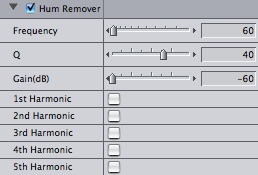 This is similar to the Shelf / Pass filters but it has several extra parameters. Frequency, Q and Gain have been explained many times above. In order to explain what the harmonic check boxes mean, we need to delve into a little audio theory.

Despite being called Hum Remover, the use of harmonics makes it useful for other purposes such as enhancing or reducing a musical instrument on a soundtrack.

The Low Pass Filter has the same effect as the High Shelf Filter - it will attenuate (reduce) frequencies higher than the specified frequency range, keeping lower ones intact.

Frequency refers to the center frequency and Q is a way of representing the bandwidth (the width of the frequency range).

Useful for reducing high frequency noise such as buzzing.

The Low Shelf Filter has the same effect as the High Pass Filter - it will attenuate (reduce) frequencies lower than the specified frequency range, keeping higher ones intact.

Frequency refers to the center frequency and Q is a way of representing the bandwidth (the width of the frequency range).

Useful if you have noise of a constant frequency on your soundtrack (such as a buzzing sound).

This is a combination of Band Pass, Notch and Shelf filters combined into in a single filter. Frequency is the center frequency, Q is related to the bandwidth (see the explanation above) and gain allows you to boost or cut the frequencies passing through the filter.

This is similar to the Echo filter but considerably more sophisticated. Rather than simply repeating sounds with a delay, it allows you to mimic the characteristics of echoes within various locations. This is incredibly useful when performing ADR (Automated Dialogue Replacement) because it is highly likely that the sound booth you record the ADR in will sound nothing like the original location. This allows you to mimic the effect of sound waves bouncing off walls, with some canceling each other out and some increasing in intensity. It can also be used sparingly to improve a flat-sounding voice.

Subtlety is often the key with this filter and Effect Mix allows you to mix the reverb with the original sound to help blend it in. Effect Level controls the intensity, Brightness controls the degree that the echoes overlap and Type allows you to specify various preset locations.

It is worth mentioning that the reverberation will end abruptly unless you extend your audio clip or fade it out at the end.

This helps to reduce the intensity of "s" sounds, most noticeable if the actor has a lisp. The controls are similar to a compressor but it is optimized for reducing sibilant ("s") sounds. Ratio controls the amount of reduction - e.g. if the "s" sound is 6 dB and the ratio is 2, it will be reduced to 2 dB.

Emphasis controls the sensitivity of the filter and Broad Band Mode widens the bandwidth so that more frequencies around the center frequency are affected.

Sometimes if a microphone is directly in front of an actor's mouth they will accidentally breathe into it while speaking, causing a wind-type noise to be generated. This filter aims to minimize these.

The parameters are similar to a compressor - ratio controls the ratio of reduction proportional to the intensity of the sound. Broad Band Mode widens the bandwidth so that more frequencies around the center frequency are affected.

These filters do a decent job of repairing troublesome audio but they are not miracle cures. Sometimes (and this is never popular with producers) it just isn't cheaper to fix it in post. Even big Hollywood movies with access to multi-million dollar sound studios re-record a lot of their audio. It is important to always think realistically.

However, I hope this two-part guide has been useful in showing you just what can be improved. I noticed a significant improvement in the sound quality of my projects once I understood more about the audio filters available to me, and I hope you'll be able to say the same.

This article was first published on·Digital Rebellion and is reprinted here with permission from the author.

Jon Chappell is an editor, VFX artist and software developer originally from the UK. He is the owner of·Digital Rebellion LLCand is a regular contributor to the Final Cut Pro community. He worked as an editor and post production supervisor on the feature film Perfect Sport and has performed post production consulting on projects including NCIS:LA and Cougar Town. His company's post production software includes·FCS Maintenance Pack,·FCP Versioner and·Cut Notes, and is used by production companies and studios worldwide.