We are really glad somebody has sat down and been through the audio filters one by one to see what each one does. Normally we stick to the favourites like compressors and hum roll-offs and don't have time to experiment, so this two part tour by FCP guru Jon Chappell is invaluable. The first part of his guide after the break.

In my conversations with other editors it became clear that for a lot of them (myself included), audio was a major area of weakness. They could handle editing, color correction, graphics, etc, but only knew a few ways of improving bad audio. This inspired me to create this guide to show people exactly what Final Cut Pro offers out of the box. 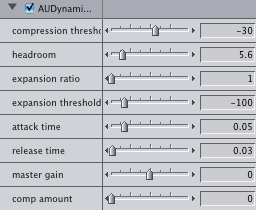 Using a compressor and expander at the same time allows you to avoid overly-loud peaks while still maintaining dynamic range. The compressor will reduce the louder portions of the audio in proportion to their distance from the threshold (i.e. louder sounds will be reduced by a much larger amount), helping to even out amplitude variations. The expander will then take the quieter sounds and reduce their volume (again, proportionally), thus evening out the amplitude variation of the quieter sounds and increasing the dynamic range.

Imagine some music where you have loud crashing drums, a relatively quiet triangle and a trumpet somewhere in between. The drums are far too loud so you apply a compressor to bring them down. The drums are now a lot quieter but you've noticed that the subtlety of the triangle has been lost - it is now far too prominent. So you apply an expander to lower the volume of the triangle to an acceptable level. The AUDynamicsProcessor allows you to do this with one filter instead of two, which is a much more efficient use of system resources.

Attack time refers to the amount of time it takes for the compressor to implement a change in volume, and release time is the time taken to reduce the compressor back to its original level afterwards.

There's a bit of debate over what "headroom" actually means as it's not a standard term. To the best of my knowledge, it refers to the number of dB the signal is permitted to exceed the threshold of the compressor/limiter.

The Dynamics Processor is a great way of compressing and/or expanding your audio to make sure that it fits within the audible range of your listening equipment.

This repeats parts of your audio. Dry/wet mix controls whether or not the repeated sounds overlap each other. 100% dry means no overlapping and 100% wet means full overlapping. Delay time is the delay before the repeat starts. Feedback controls the number of repetitions. Lowpass cutoff frequency stops certain low sounds from passing through the filter.

This filter is normally used for atmospheric effects. 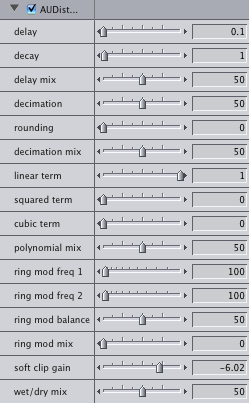 This is a very comprehensive distortion filter offering a lot of control. I can't give much advice on the various parameters as I don't actually know what they mean and there's no documentation available. I would suggest adjusting by ear (it is probably worthwhile lowering the render quality while adjusting, and then raising it again once you're happy with the results). 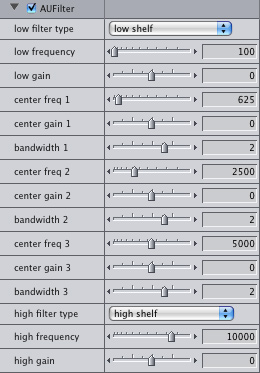 I use this one a lot. It allows you to take 5 bands (5 ranges of frequencies) and adjust the gain up or down for each one. If a person's voice is muffled, increasing the gain on the higher frequencies can often improve this. I also sometimes use it to add bass to make a person's voice sound richer.

The bandwidth slider allows you to adjust the size of each frequency range, with the frequency sliders referring to the center of the range. 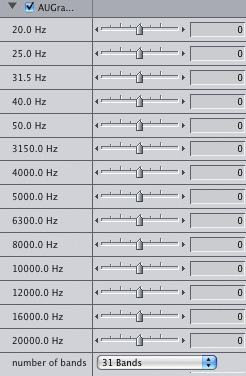 This is similar to the AUFilter above but the size of the frequency ranges cannot be adjusted and you can have up to 31 bands instead of just 5. This site provides a guide to common frequency ranges.

I've used this a couple of times to boost bass in a person's voice but I generally prefer AUFilter for this. It's good for removing or reducing a specific frequency range.

This cuts off frequencies above the cutoff frequency, allowing lower sounds to pass through. The gain slider controls the amount that the frequencies passing through will be boosted.

Good for removing low rumbling sounds such as traffic or for reducing very deep voices (I have had to do this at times).

Reduces (attenuates) higher frequencies and lets lower ones through, controlled by the cutoff frequency. Resonance controls the intensification of the frequencies that pass through.

Reduces frequencies lower than the cutoff frequency and lets higher ones pass through. This is similar to the AUHighPass filter above but this offers the ability to adjust the gain instead of resonance.

This allows you to compress multiple bands (frequency ranges) individually for more control than a traditional compressor.

Pre-gain boosts the signal before it is processed which is useful if the signal is too low to be processed adequately by the compressor, and post-gain reduces the gain back to a normal level afterwards.

Crossovers 1, 2 and 3 define the point at which the previous band ends and the next one begins. Threshold refers to the amplitude level at which the compressor kicks in. Headroom, as stated above, probably gives you extra leeway above the threshold. Eq allows you to boost or lower each band.

Possible uses for the Multi Band Compressor include lowering the dynamic range of bass sounds without interfering with higher frequency sounds. This is different from the High Shelf Filter which indiscriminately cuts all bass below a certain frequency.

AUNetSend is one of the most interesting filters in that it's not actually a filter. It does absolutely nothing to affect the way your audio sounds but what it does do is allow you to send audio across a network.

You need to have an application that implements audio generators. Audio editing applications such as Logic implement these. Alternatively, there is a tool called AU Lab in /Developer/Applications/Audio if you have the developer tools installed. Soundtrack Pro does not support this. Add an AUNetReceive generator to the track in your audio application, add an AUNetSend filter to your FCP audio clip and hit play in FCP. You should see "AUNetSend" pop up in the AUNetReceive configuration dialog. Select it and your track should be receiving the audio from Final Cut Pro. Note that it only appears while the timeline is playing in FCP.

In my testing, the Status parameter appeared to do absolutely nothing.

This allows you to boost or lower the amplitude of a signal within a certain range. This is useful if for example you have a high-pitched buzzing noise in the background and you only want to eliminate that particular frequency and keep your higher sounds intact.

Attack and release time, as mentioned above, control the amount of time it takes for the filter to implement a change in amplitude, with longer times allowing a smoother transition. Pre-gain allows you to boost the volume before it reaches the filter in order to change the number of frequencies being affected. The limiting amount allows you to limit the amount that the filter will reduce the amplitude.

Adjusts the pitch of your audio, obviously. There are a LOT of controls though, and I have to admit that I don't have a clue what a Glb Trigger Thresh or a Loud Aggr K is. Effect blend blends the pitch-shifted audio with the original and is sometimes necessary to make voices sound natural. It is worth mentioning that I've gotten perfectly acceptable results by adjusting the first two parameters and not bothering with any of the others. I'd imagine that most people wouldn't have to adjust more than these.

I tried a Google search on some of these parameters but they only turned up forum threads where people were asking what on Earth they meant and no-one was able to solve their problem. If anyone does know, I'd be interested to hear from them.

This can be useful for making a male actor's voice more masculine (yes, I have had to do this!). 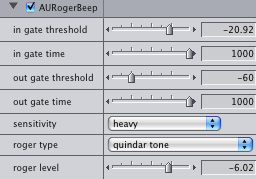 This emulates the "roger beep" sound when someone lets go of the button on a walkie talkie. It will automatically play the sound when the audio level drops below a certain threshold for a certain amount of time (as if the person stopped speaking).

This is an effects filter with quite a narrow purpose so it's not something that gets used very often.

Similar to AUDelay except that the delay time is set as a number of audio samples instead of a number of seconds.

This article was first published on Digital Rebellion and is reprinted here with permission from the author.

Jon Chappell is an editor, VFX artist and software developer originally from the UK. He is the owner of Digital Rebellion LLC and is a regular contributor to the Final Cut Pro community. He worked as an editor and post production supervisor on the feature film Perfect Sport and has performed post production consulting on projects including NCIS:LA and Cougar Town. His company's post production software includes FCS Maintenance Pack, FCP Versioner and Cut Notes, and is used by production companies and studios worldwide.