Filip Vandoorne has put together a very detailed guide on how to use libraries on an NFS filesystem. Could this be a much cheaper option to Xsan? Is desktop shared storage here?

The solution to use NFS for FCPX project sharing has been known for some time, but the setup of NFS was always some obscure voodoo ritual, easier with Bresink NFS manager, but still...

So when I found the correct 'formula', I decided to make this how-to article for the FCPX community. Not everybody needs or has the budget for a full XSAN configuration!

Unlike Final Cut Pro 7 Projects, Final Cut Pro X libraries cannot be opened or saved to an AFP or SMB share point. It needs to be on a local storage or on a San. Using a San ( Xsan or metaSAN ) is more complex and requires a bigger budget, out of reach for postproduction companies with only a few edit suites.

Locally mounting sparse images that reside on the server is an older workaround which is well documented, but has disadvantages.

An other option is to use NFS as a file sharing protocol as pointed out by Amanda Burns at Florida Atlantic University and Bob Zelin.

NFS ( Network File System ) is a file sharing protocol allowing a user on a client computer to access files over a network much like local storage is accessed. It is built into every Mac running OSX as it is one of the building blocks of UNIX.

Setting up the server side will normally require advanced command line skills. But with NFS Manager from Marcel Bresink you can configure everything through a convenient user interface. You also don’t need OSX Server, so any Mac can be used as an NFS Server. On the client side you don’t have to install the Bresink software.

LET'S DIVE INTO IT:

With NFS, there is no login or authentication system. The way to limit access is to define an IP subnet or a list of IP addresses that can access the NFS server. We need to designate witch user-id will be used when creating or modifying files. This means that all client computers will use the same user-id to access the server. In a small setup it is probably not a problem.

For security and performance we could consider connecting the edit stations to a separate ethernet switch with an 10GB uplink to the server.

In this example we made a user called fcp on the server, which will be used for that purpose. If you would access the fileserver via SMB or AFP protocols you should also login with that same user.

Download the NFS Manager application at www.bresink.com.
You can evaluate the application in demo mode without functional restrictions. It only costs 17,85€. On the homepage there is a warning about Mavericks, but to my experience version 3.9 works fine.

After download, move the application to your Applications folder or Utilities folder.

Give the server a 'normal' Computer Name. Avoid spaces in server names and disk names.

Here our server is called videoserver and will be found on the network as videoserver.local 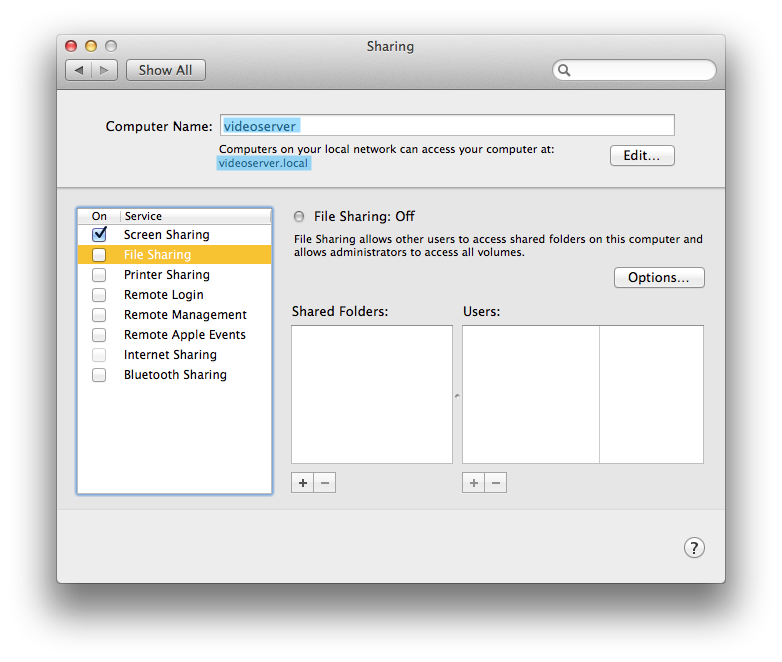 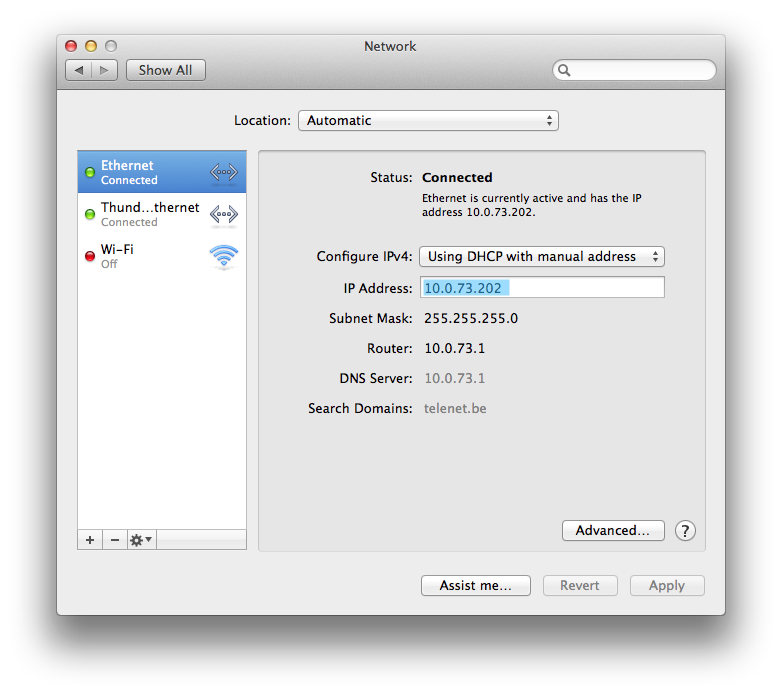 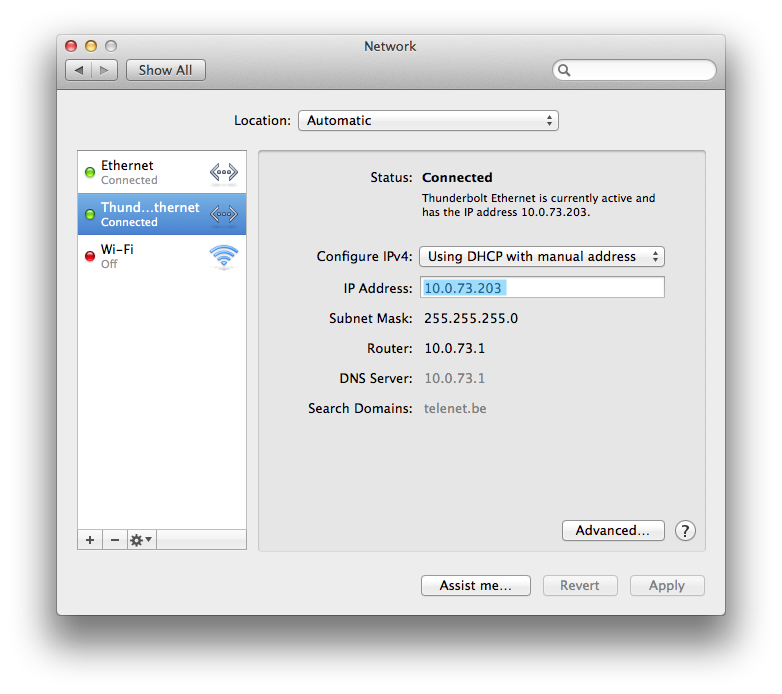 Besides the admin user, we recommend making a second user ( here fcp ) for normal use. In Login Options, set this user to login automatically when the server is started. This way the fcp user can also view and use the files on the shared volume, and will be also the user-id that network clients will use. If you have a small setup of 2 or 3 computers, the server can also be used as a normal editing station this way. 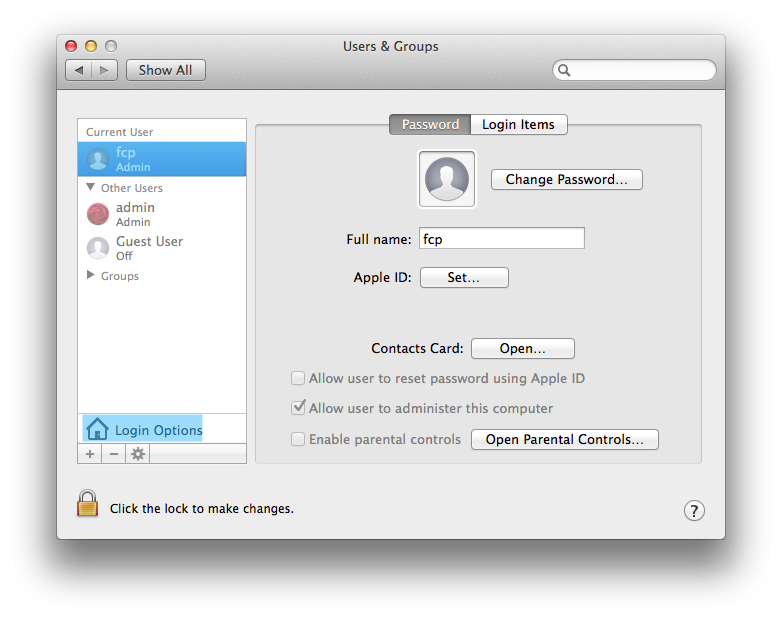 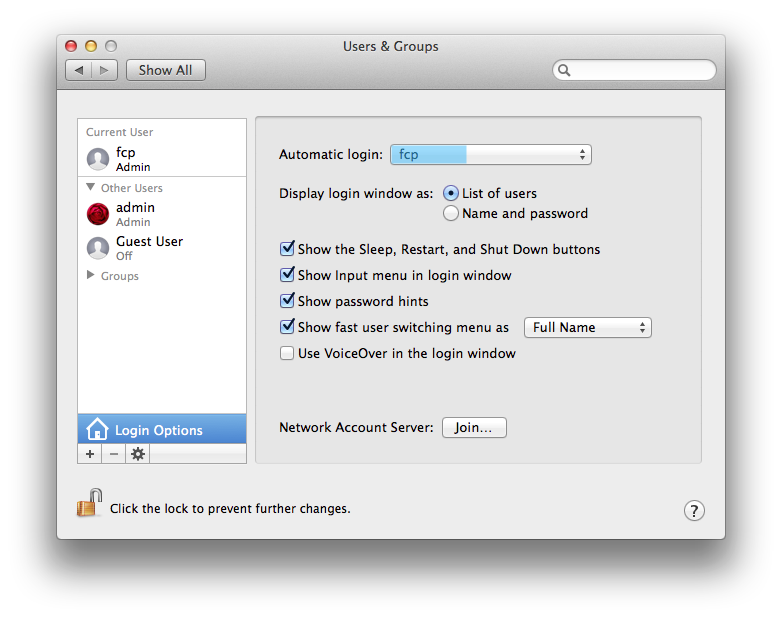 If you also need file sharing for machines that don’t use FCPX, you can activate the normal File Sharing. In this example our volume RAID, is also be shared using AFP and SMB, and is accessible using the fcp as login. The AFP en SMB file sharing is optional and not needed for the NFS sharing. 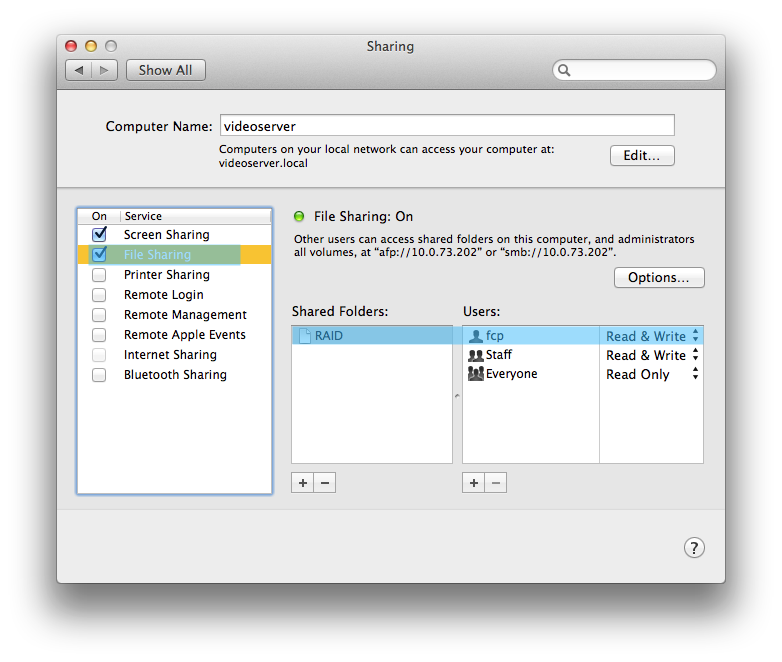 It will tell you the software runs in Demonstration Mode. This will disappear once you bought the application. Ignore the warning about DNS. 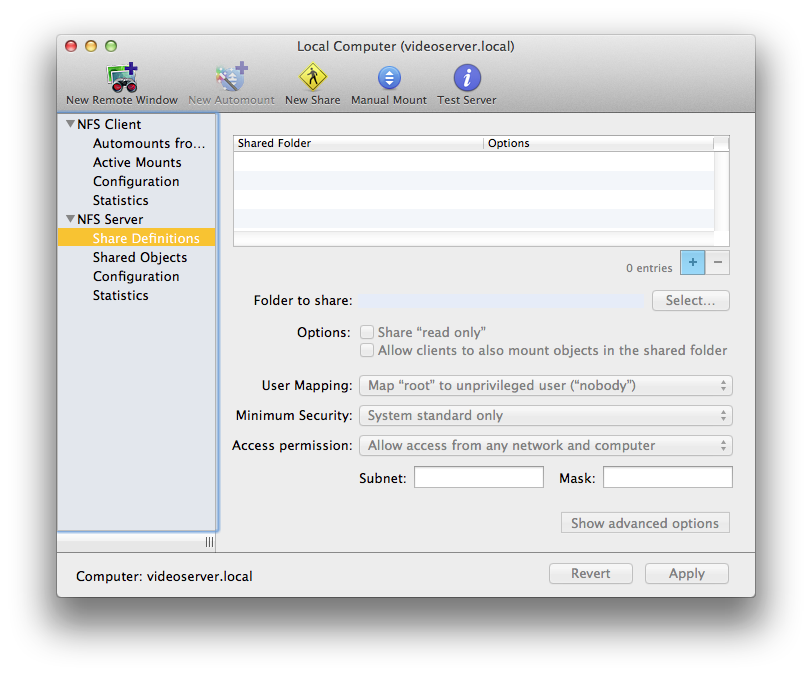 Press the Select button to select the volume of folder you which to share, than change also the other settings as indicated. 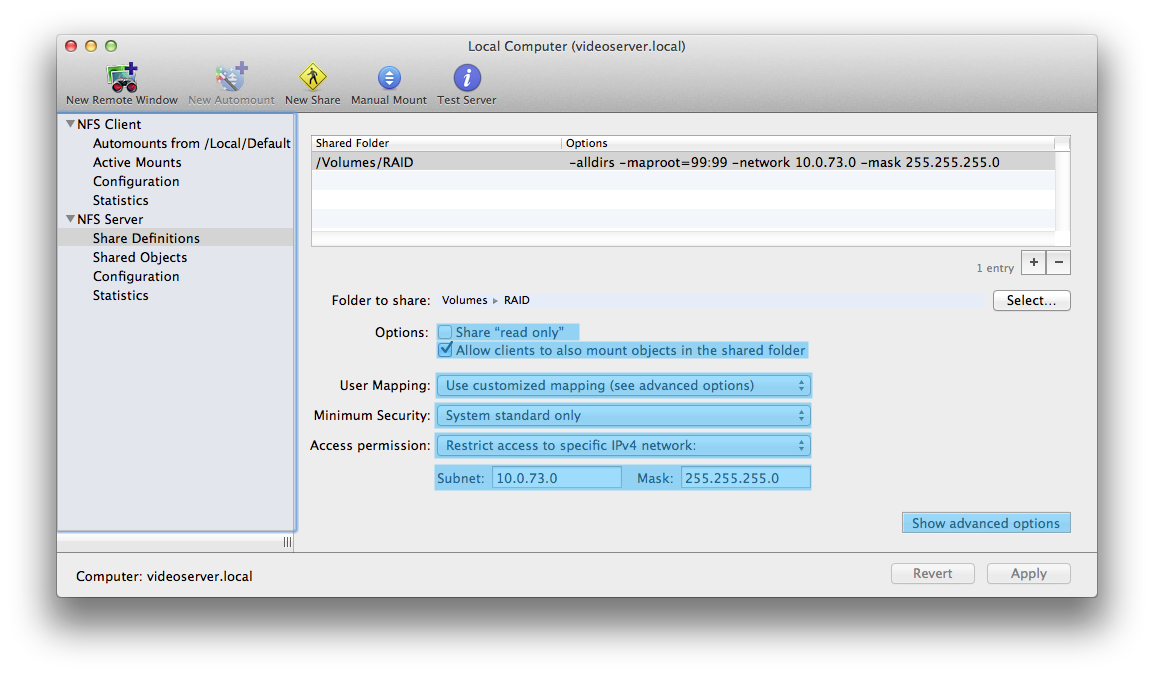 Click on Show advanced options and change the settings as indicated 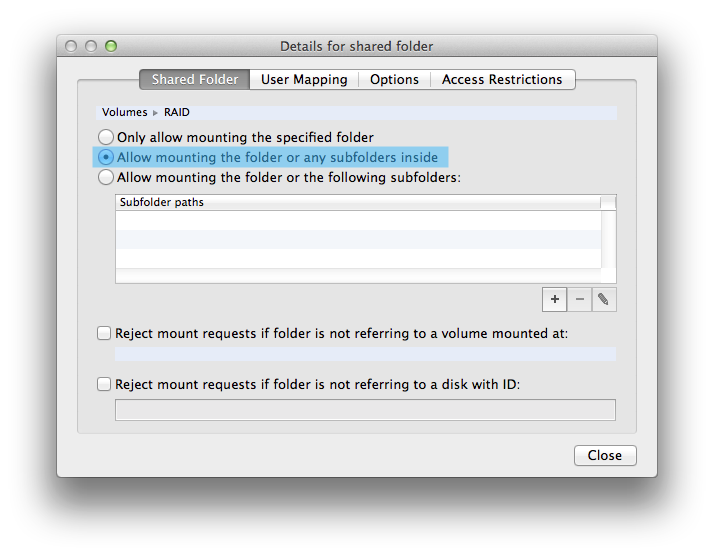 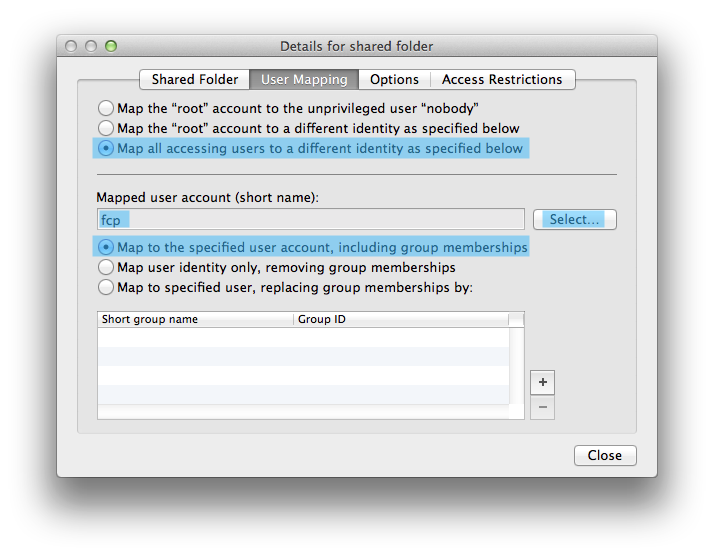 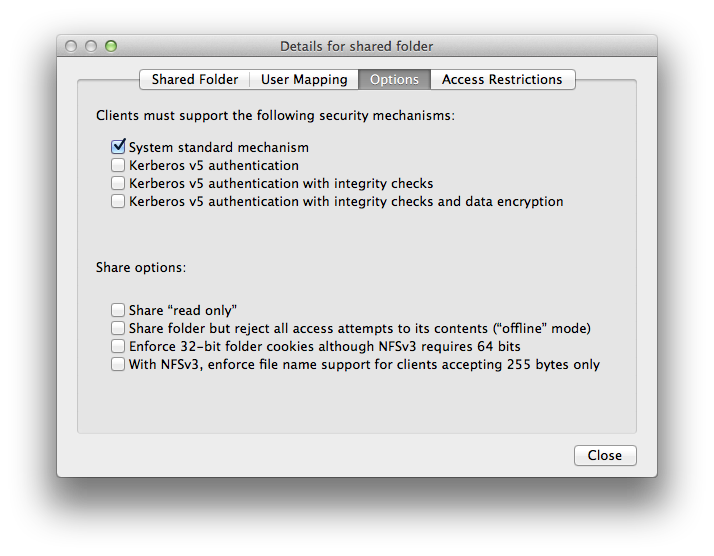 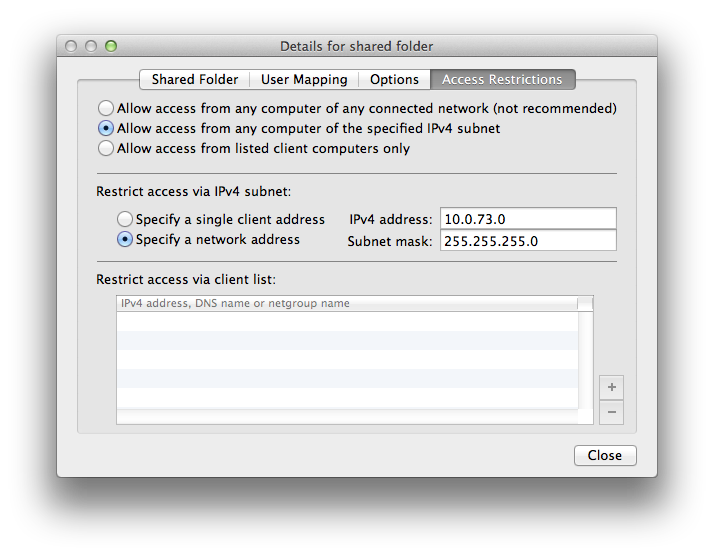 Now the setup is done, you could check your other settings as below, but standard values will be good. If there is nothing in Shared Objects, reboot the mac and recheck in NFS manager. 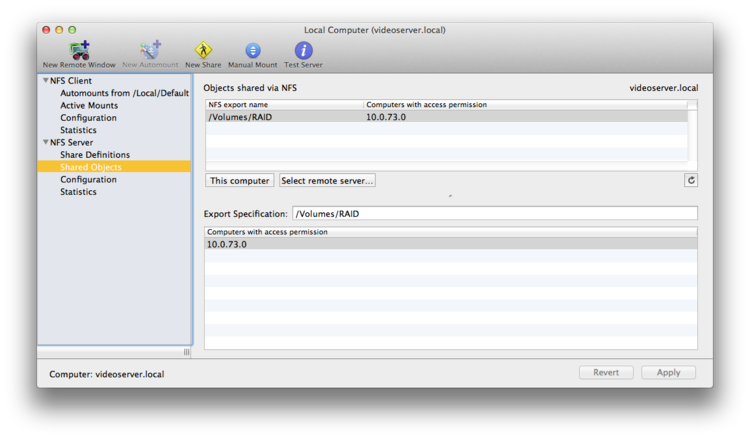 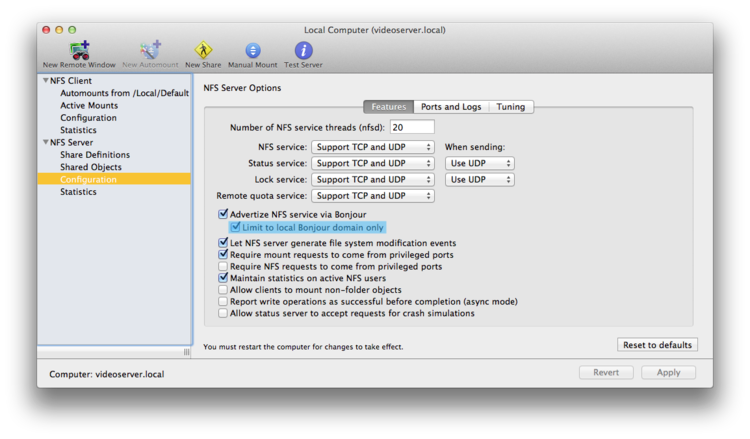 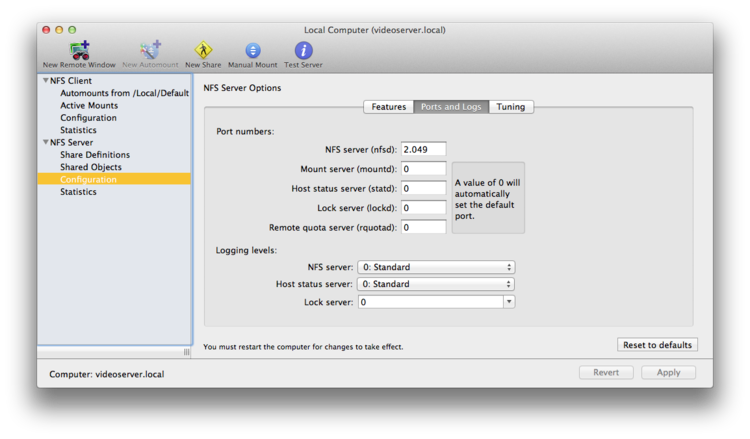 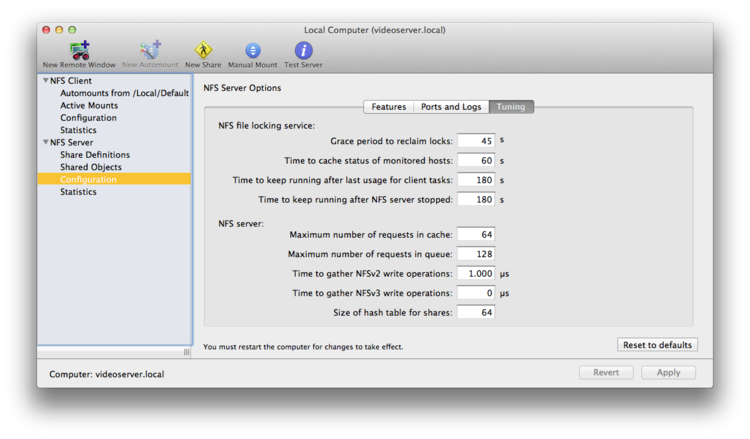 Quit NFS Manager, setup of the server is done!

If you reboot the mac all values should still work.

Go to your client computer 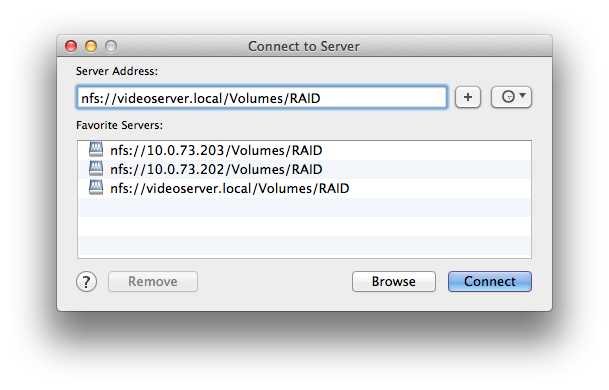 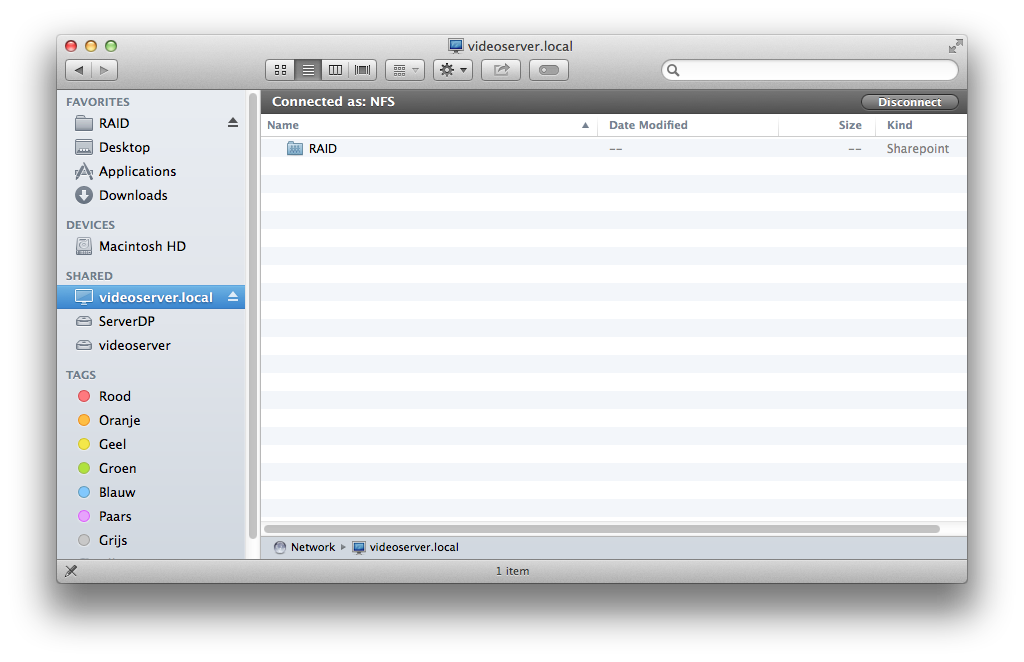 For easy access to your NFS server : in finder, menu Go, Computer, and drag an alias of the NFS share to your desktop, and perhaps to your sidebar as a favorite. 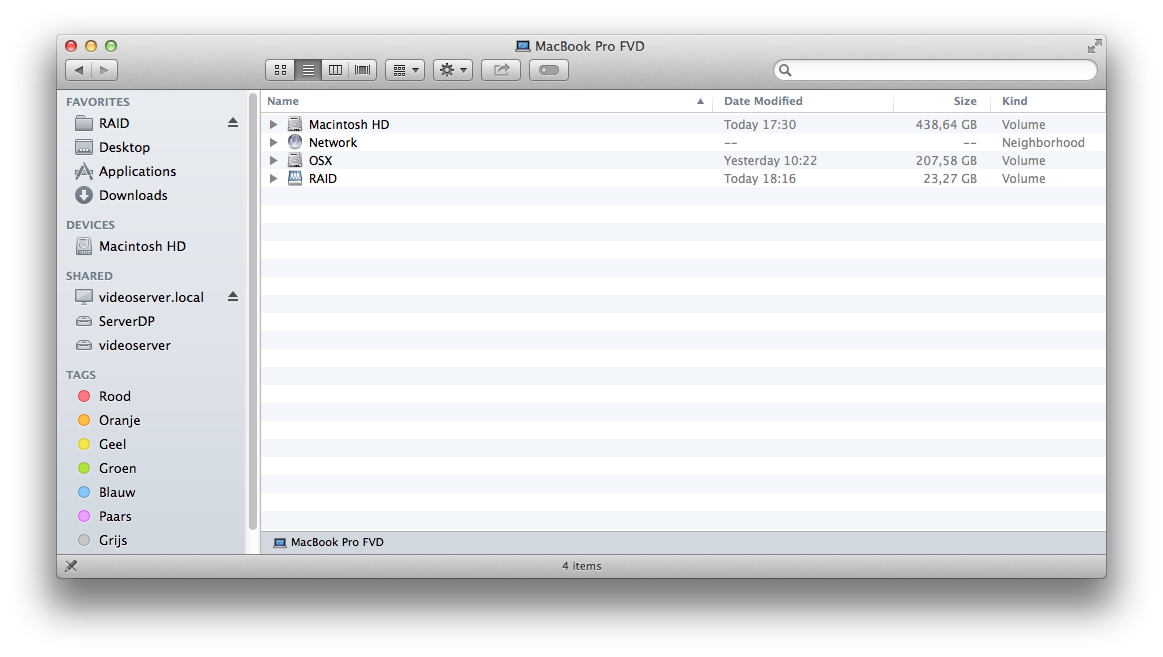 That's it, you can start editing! 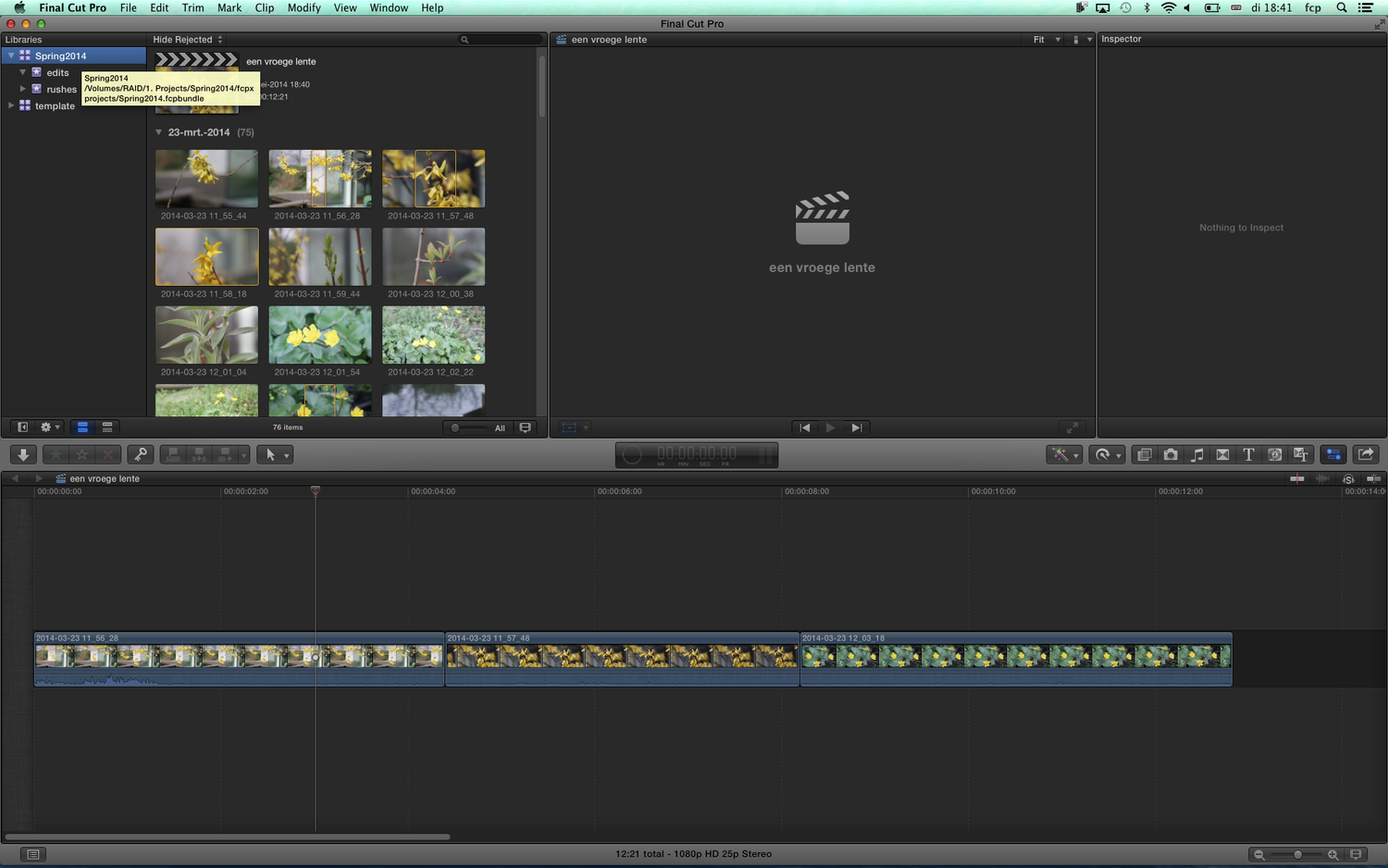 If it doesn't work or you need somebody to help you to set it up in your setup we can probably help you, it's our daily job as an Apple Authorised Reseller and Integrator. 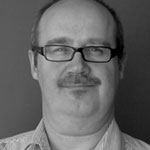 Filip Vandoorne works at Double Precision, a longtime Apple specialized reseller based in Belgium. Almost 2 decades ago, their first customers were architects, but that changed when the first DV-CAM cameras became available. They now consult, install and maintain post production-related solutions based on Apple and Adobe products.

Filip asked us to add some comments to the questions below as he doesn't have a Facebook account.

Most of the time the link aggregation = combining multiple real ports in 1 virtual ports gives problems in osx. Link aggregation is used if you want redundancy on the same ip nr and also you can get extra speed, but the setup of link aggregation on the network switch and stability on the mac side is mostly a pain. So to keep things simple and working in all situations :

If you use a MacPro with 2 ethernetports - or a Mac Mini with a extra Ethernetport on the Thunderbolt or USB3, give each port a separate fixed ip address. If you have multiple client computers, let half of them connect to the first ip address with nfs://firstipaddress/Volumes/Nameofyourshareddisk, and the second half on the second ip address of your server.
Or if you more money, get a 10GBit Ethernet card for the server and a 10Gbit Ethernet switch.

if your clients computers dont have 10Gbit cards, a switch that has 2 or 4 10Gbit ports and the rest 1Gbit will work fine. Or if you dont have a lot of clients computers, get one of those netgear 10Bit switches, 8 port or 12 port.
-- attention : it is not because a switch has SFP opticals ports that these ports are 10GBit !

D-link and Cisco also have models with 4 10Gbit ports and 24 or 48 1Gbit ports that will work fine and are cost effective if you need more than 11 clients computers.
Keep in mind that Thunderbolt-1 is only one 10GBit channel and if you use it also for storage as with a macmini with only 1 Thunderbolt port, this combination will have some limitations, but work fine for 2-5 clients.
Other more performant combinations can be made with a older Mac Pro or a new Mac Pro