Why Final Cut Pro X's killer feature may be yet to come...

Mike Fernandes' article on using Final Cut Pro X on the Emmy winning George to the Rescue is one of our most popular ever posts. This next article from Mike looks forward to the future of FCPX and why Apple might already have the killer feature within their grasp already. We think the debate might be interesting on this one!

Mike and the FCP.co office think alike. We have had three conversations with people in the FCPX ecosystem that have been along exactly the same lines: The possible dominance of Apple with a completely vertically integrated production and distribution mechanism.

Once again, we will let Mike take up the story...

So lets just address right at the top. I don’t know what the future is. I don’t have any information as to what anyone's plan is. This article is purely speculation based on trends that I am seeing in the news and rumors that currently permeate the internet. So please read this article as one of fancy and a idea of 'wouldn’t it be cool if….'

So now that that’s out of the way, let's deep dive into the 'what if world' and ask the question of what if? While discussing the training and implementation of Final Cut Pro X, I was asked why I think this as a platform is the future of editing.

While I often point to the current and very real examples of why I think Apple has a leg up on all other editing programs, ( metadata and asset management, color and audio tools, magnetic timelines and a tighter integration with compressor and motion) I allowed myself to deep dive into a world of “if they did this they’d dominate the industry.”

So to get to television and media, let's take a jump back to the early 2000′s when iTunes was introduced. What started out as a basic media player has become the biggest music retailer in the the U.S. With the introduction of the iPhone in 2007, Apple again forever changed what we thought a mobile device could be. In 2008 they added Apps and the App store ( of which I believe I spent $90 on the first day of its availability ) and it changed the way we viewed phones yet again but also added a little rock and roll to the previously bland term “developer.”

So you’re probably wondering what’s the connection to video editing?

Apple has quite a history of building a “thing” and then opening the doors and providing users access to get their art on to those things.

With iTunes it changed the music industry by giving artists a place to sell their content and gave users a place to easily purchase said content.

The same holds true to the App Store. Apple made a really cool phone and then gave the world a chance to make it better, all the while sharing their profits with the artist with more money going to the ARTIST than into their own pockets.

What if Final Cut Pro X is actually how they plan to fix television? Apple TV is already pretty epic. ( I have three in my house already and it’s become my primary source to view content. ) Attached to every Apple TV is an iTunes Account most likely with a credit card already entered into it, so buying content is as easy as clicking “BUY” 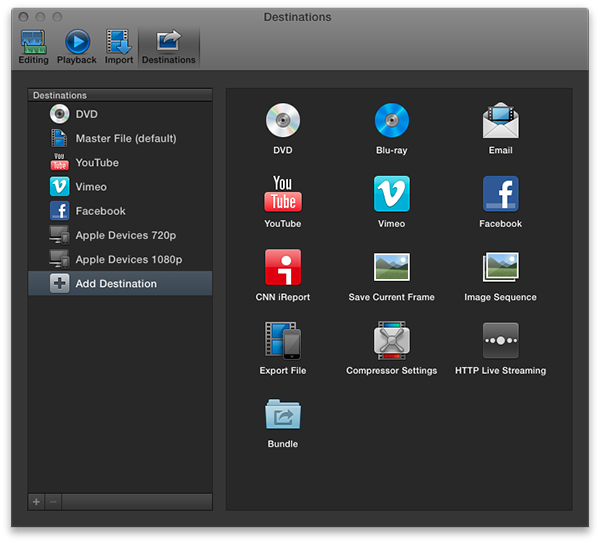 So if this ability to auto upload ( and with great ease ) already exists, what is to keep Apple from creating an upload button to their iTunes Store?

Think about that for a moment. Let's say I am an indie filmmaker. I shoot my project and edit it in Final Cut Pro X. Once I have a product that I am happy with, I click on the share button and there's an option to upload my masterpiece directly to iTunes.

My wonderful film is now available for anyone to rent or buy. And Apple using their current business model of profit sharing takes a cut of the film for the distribution and then pays me the rest.

On the other side of the fence, The Apple TV viewer fires up their home theatre on a lazy afternoon looking for something new to watch. They stumble upon my movie and for $0.99 they are able to buy it. There is a reported 13 Million Apple TV’s already in homes. So if 100,000 people decide to buy my film, ( and assuming Apple’s current 30%-70% split ) the pay out would be about $70,000. That's more money than most make in a year.

Let's keep in mind that's a super small percentage of the available boxes. That’s not including the computers and i-devices that are out there that can also access that content. That number is astronomical. 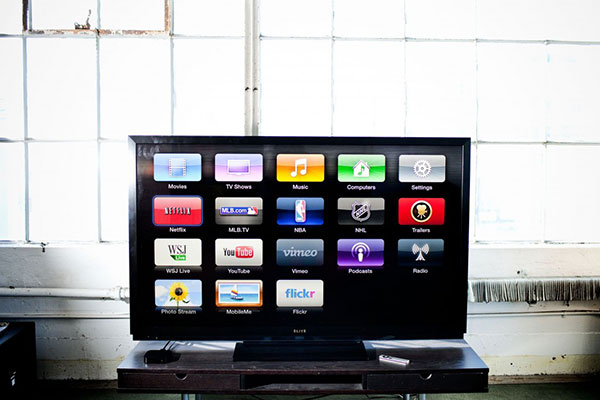 Apple wins because this sort of access is only accessible through their video editing program of $299.99 + they made 30% of your gross. ( Which in terms of media distribution is a super low cost. ) You as a content creator wins because you now have a distribution method that makes you money and you’re selling your products directly to the consumers.

Making a profit is great, but being able to have such a large platform to create and sell your art directly to people is game changing. By using Final Cut Pro X to edit and deliver your products, Apple is able to maintain a level of quality control on the content they are taking in, adopting the similar approval processes of the App Store. Files are correctly formatted in the proper codecs, Metadata is added to where it needs to be and is easily entered by you the creator. The amount of content they have the ability to offer is now so vast, it will probably rival even the largest of media companies.

You could even dive deeper into that world by giving musicians the ability to license their music for editing, all accessible through Final Cut Pro X. So now you have artist supporting other artists, all the while everyone is able to profit off it.

The pieces are all there and we the consumers are already well versed in the ecosystem. So if this is in fact the direction that the company is going, the future of being a content creator is quite bright. Getting into Final Cut Pro X is not only a tool to create, but a fully fleshed out business model that could in fact change the entire video landscape the same way iTunes forever changed music.

iTunes made downloading music easy and friendly for all. The iPhone made touch screens and apps part of our everyday lives. What if Final Cut Pro X is not only a great content creation tool, but the next big thing in television that you could pick up today?

I don’t know what the future is and I am just a dreamer like many of you out there. But the future that I’d like to see is one where creating content is only limited by what you can imagine, and building an audience is as easy as clicking Share.

We must thank Mike for such a great article and distilling a lot of thoughts and conversations that we have had over the last year or so. We think Mike's points are even more relevant with the creation and editing of footage in 4K. Apple could leapfrog over the traditional broadcasters and have 4K or UltraHD delivered to the home faster than anybody.

On the other hand, uploaded content would need to be policed, we don't want endless 4K cat videos!