Motion has had 3D capabilities for a while, but they haven't been updated since 2009 for the basics and 2015 with 3D text. Motion VFX's updated plugin m02 adds much more 3D functionality and of course creativity to the app. We spoke to MotionVFX who kindly gave us a quick tour of the app and its 3D capabilities.

A lot of users will say that Motion has been neglected in the development of Apple's pro Apps. You have to remember though that the majority of the effects within FCPX are powered by Motion templates.

But with machines, the GPUs and the macOS getting faster and more optimised every year, there is a lot of untapped potential within Motion and this is where MotionVFX has stepped in with m02.

After the success of m01, m02 is a huge update on the previous version and creates photorealistic 3D graphics in a matter of minutes. Jakub Jaroszek, the development manager tells us more after the demo video.

It's obvious that 3D graphics are everywhere, we see it in TV news and commercials, product presentations and visual effects. But making such content used to be slow, expensive and complex to master.

First you need to pay around 3500 dollars for a single copy of a decent and reliable 3D app, then you have to spend countless hours learning it, and once you're great at it, you can start making your own animations.

But even then you need to wait several hours or even days for your scene to render! Things get even worse when your client decides to change something - countless hours or days wasted on adjusting and re-rendering.

These are the main reasons that kept most of us from including high-end 3D in our edits for many years. Luckily, now all of it is about to change.

mO2's interface has been tightly integrated into Motion's and Final Cut's UI so it feels familiar right away. We're not being overwhelmed by a ton of parameters as in regular 3D apps, everything is simple, clean and organized. 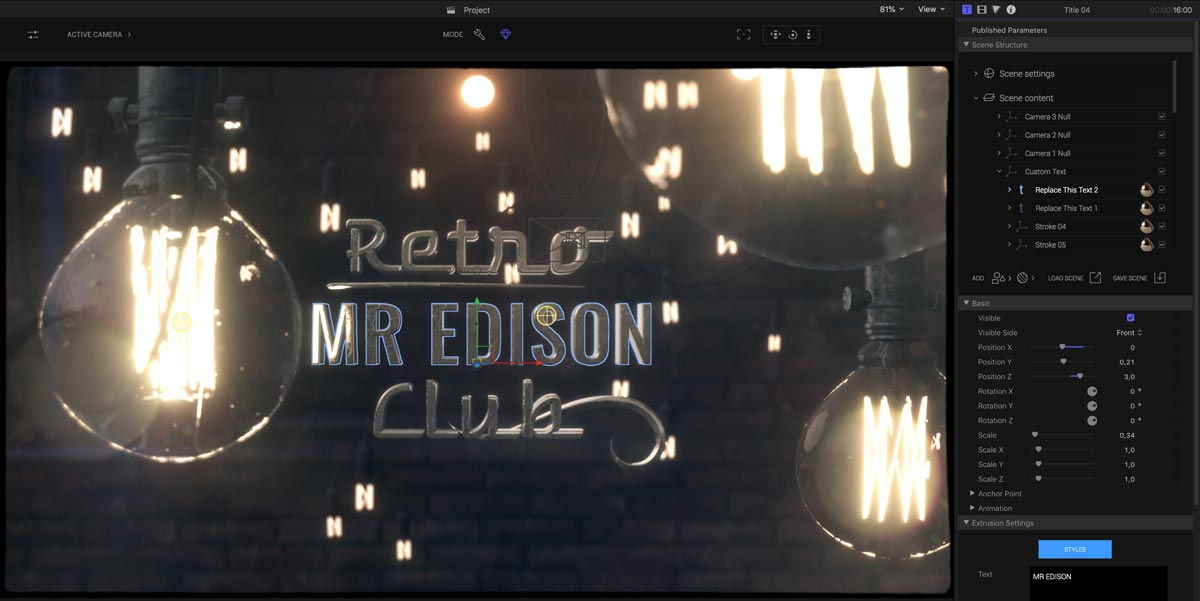 mO2 contains an incredibly large library of built-in templates that can be used right away, so even if you don't have time to dig into its features, you can still use them in your current projects. Just drag one onto the Timeline, change texts, SVG logos and/or colors and you're done.

MotionVFX made sure that making such adjustments is as easy as it gets. Hovering the mouse cursor over an object within the Viewport will display an outline around it, so you always know what you're clicking on and once an object is selected, its settings will show up within the Inspector. This means that we only see what we need and each slider makes perfect sense. 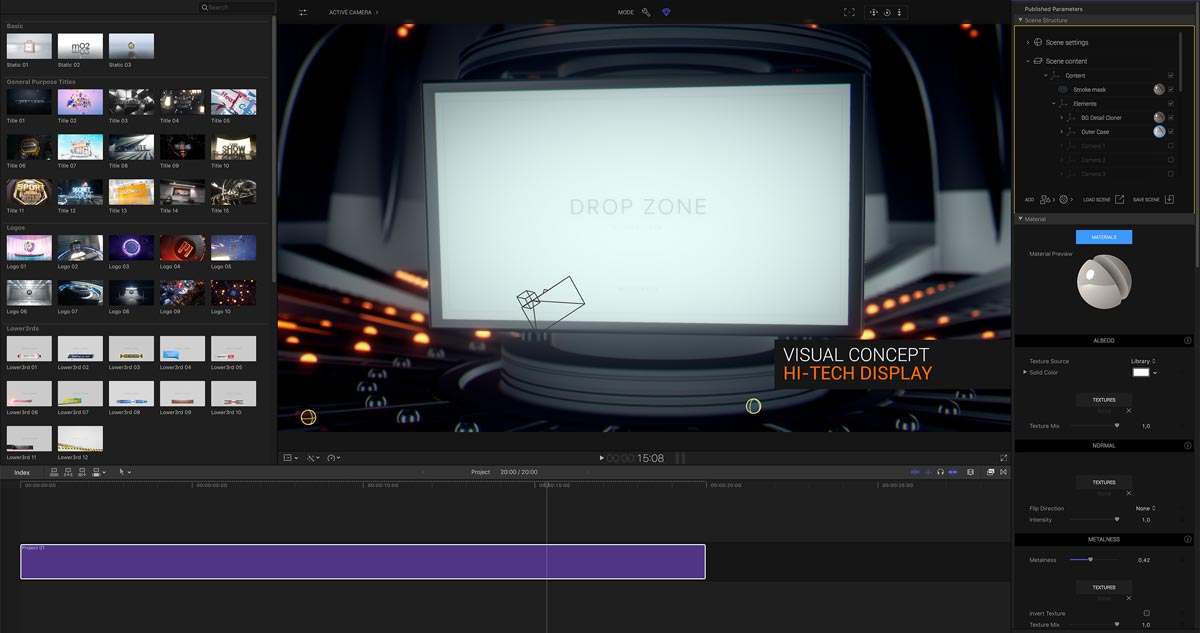 Building entire scenes from scratch is also quick and easy - add a model from mO2's Model Library and move, rotate or scale it however you like using the On Screen Controls. You can even animate it by applying one of 500 included Object Behaviors to it. It means instant animation without setting a single keyframe!

A true game changer, especially for FCPX users, who are unable to create complex animations due to Final Cut's linear-only keyframe interpolation. 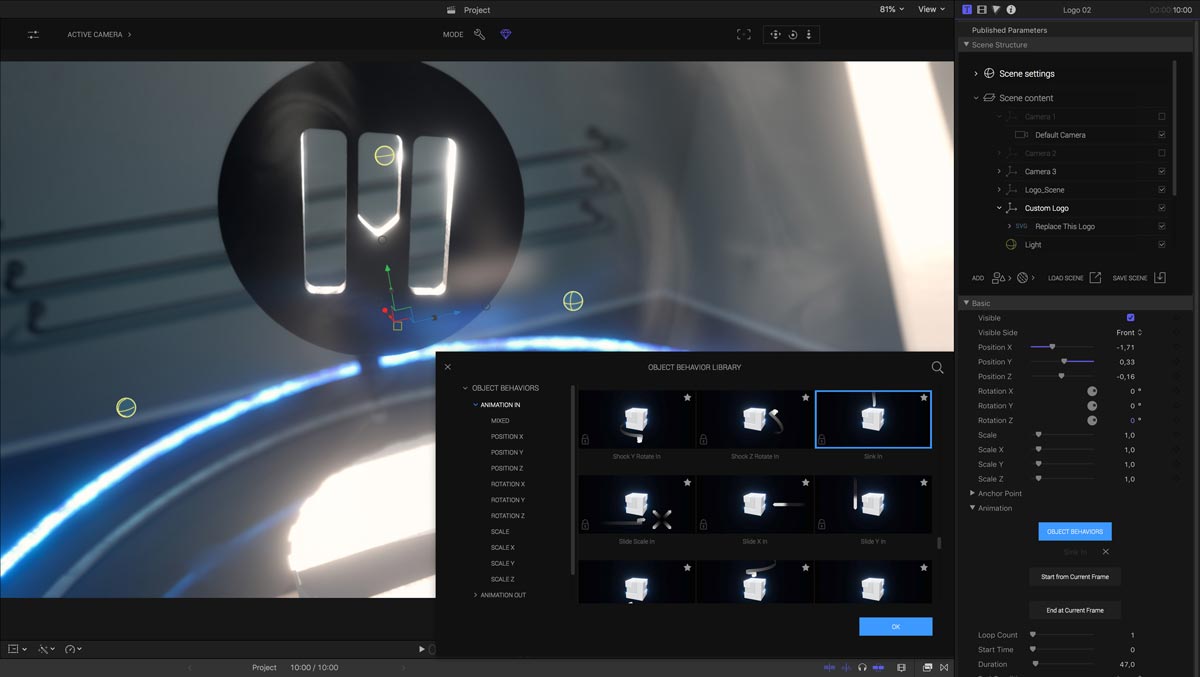 Right now, all studio guys are thinking "sure, but even a great model will look awful when it's poorly lit, and building a decent lighting setup takes a lot of time". Not in mO2. Simply picking one of 130 included HDRI Environments alone will drastically change your scene's mood while keeping its content believable. It's the fastest route to photoreal 3D in mO2. 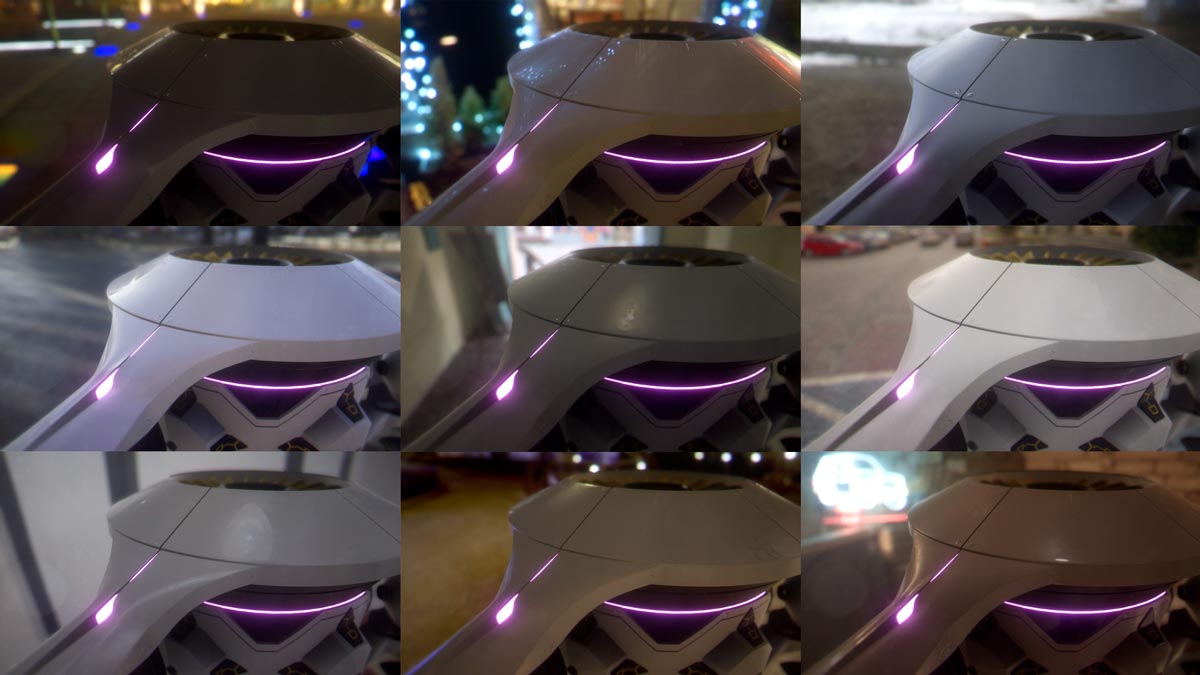 And if control is what you want, you'll be amazed what can be done using mO2's Area Lights. They are quite different from what can be found in other 3D apps (including Motion) because they don't shine from a single point in space. They have an actual surface that is going to be reflected from shiny Materials, as well as diffused by matte ones, so they can be easily used as softboxes or reflect panels. A real treat for every filmmaker and studio gaffer.

mO2 is a 3D engine built specifically for rendering realistic graphics, so no matter what you throw into it, it will look fantastic. It has an impressive arsenal of state-of-the-art post-processing effects built into it that make a real difference.

Everything in it is physically based, not just materials and lighting. If you set the Camera's focal length to 50mm (FOV~45), you'll end up with a portrait-like behavior where the depth of field gets more shallow and things start to defocus into the shape of the aperture (in this case a hexagon) instead of becoming a blurred splotch. On the other hand setting the FOV to around 90 will result in a sharp, panoramic image.

Of course this is just the tip of the iceberg. Other high quality effects can be noticed when building a scene. For example making a Material really bright will cause it to bleed onto the neighboring pixels, resulting in a soft, luminous look. Also, animating the Camera or any other object in the scene will automatically generate an accurate Motion Blur. In real-time.

All of this is being done automatically by default so you don't have to change a thing. Just set up your scene like you would do in real life.

Instancers let you duplicate 3D objects in brilliant new ways. But it's not just about replication, each Instancer can also have a number of Modifiers applied to it. These objects have a shape but are invisible in the final render. Instead, they automatically move, scale and rotate the replicated objects within their range, giving you unprecedented control over massive amounts of instances in your scene. 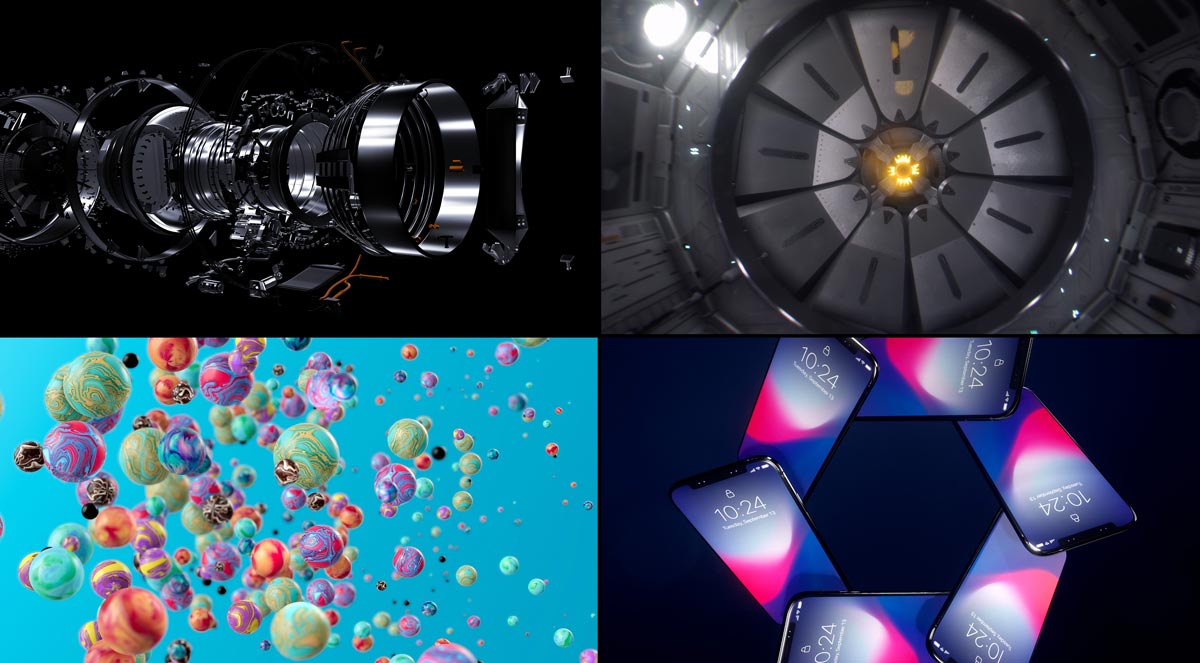 FCPX and Motion aren't just about motion graphics, often we just need a simple animated logo or text. That is why mO2 includes a powerful 3D extrusion engine that allows us to fully stylize our 3D text or extruded SVG shape and even add separate Materials to its parts. 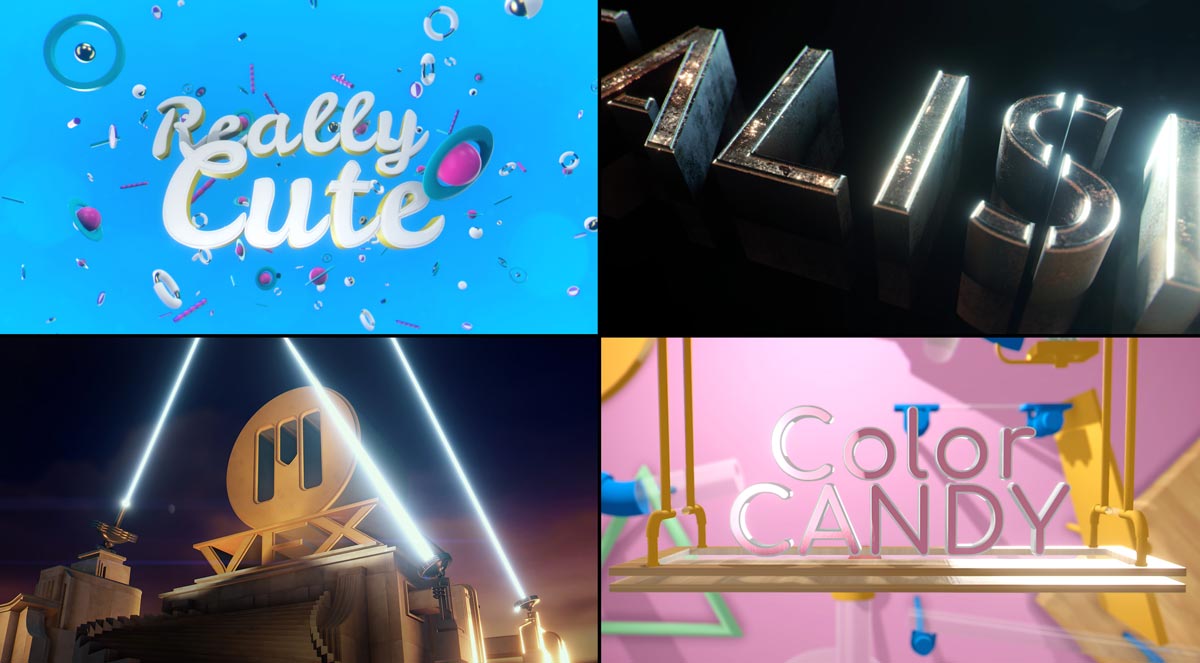 Such modifications can be saved into mO2's Styles Library for later use, and if time is the factor, we can simply choose one from over 40 fully stylized built-in Styles. 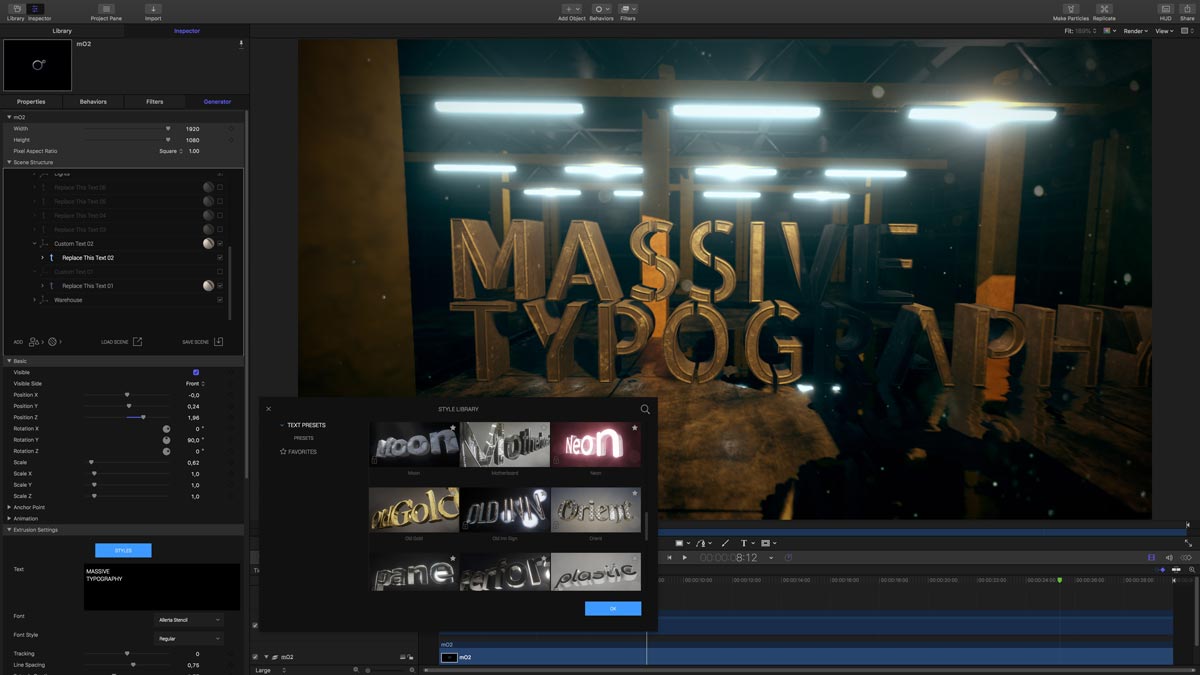 We've mentioned that Object Behaviors allow to animate objects without using keyframes. Of course, they can also be applied to the 3D Text and SVG objects, but mO2's text can be taken even further. Applying a separate Text Behavior to it will not animate the entire text object as with Object Behaviors, but move each letter separately. There are 80 of them included so there shouldn't be any problems with finding the one that will fit our project.

Scenes with complex, textured models are very common, but often enough having just a couple of simple shapes is more desirable. mO2 includes 12 incredibly customizable C4D-style Primitive objects that can be used to create entire scenes. Also, the fact that they are being generated on-the-fly means that projects built using them will load pretty much instantly!

These are just a couple of mO2's features, but the list goes on. The support for a huge range of file formats (JPG, PNG, TIF for Textures and Backgrounds, EXR and HDR for Environments, glTF 2.0, OBJ, FBX, DAE, 3DS, LWO, LWS and C4D for models) allows to use almost any asset available on the Internet and cooperate with 3D artists who work in many different apps.

It includes a lot of pro workflow shortcuts too. For example, the ability to save the entire scene to disk allows us to transfer it between workstations or simply back up our work. We can also save just a part of the scene along with its materials, and even animations into the Model Library and effortlessly use it afterwards in our future projects. Not to mention saving our own Materials, 3D text & SVG Styles and much, much more. MotionVFX really made sure that we will never have to repeat our work ever again.

As we can see mO2 is not just a plugin. It's an entire platform meant for creating amazing 3D graphics in no time and the built-in FCPX Titles, projects offered on MotionVFX's website and compositions included in the plugin's trailers are a perfect example of this.

It's simple, powerful, and fast as hell. Almost every parameter has its equivalent in real life so it takes guesswork out of the question and the more complicated aspects are being done automatically under the hood, making it the easiest 3D creation tool ever. And considering that Motion costs only $50, together they also form the most affordable solution for 3D artists.

Once you start using it, you won't be able to live without it!

mO2 can be purchased directly from MotionVFX website, along with multiple expansions:
1) mO2 plugin -
2) Advanced Shaders a pack of Materials for the mO2 plugin, which can be applied to any model, 3D text, extruded SVG, etc. It's worth noting that most of them are actual scans of real-world surfaces. You can’t get more real than that.

2) Model Packs - these are sets of fully textured models for the mO2 plugin which can be used to create entire scenes. They have been divided into five packs depending on their purpose:
- Commercial Pack
- Electronics Pack
- Industrial Pack -
- Money Pack
- Sci-fi Pack

Additionally, all of the plugin's features have been described in great detail in its Manual, also available online.