The first FCP Tour takes place in Madrid 6th May 2016

On the eve of the first FCP Tour in Madrid (6th May 2016) Jesús Pérez-Miranda takes us on his journey from Avid, through FCP 6&7 and on to Final Cut Pro X.

As the FCPX user base keeps expanding, it is good to see new events being held to bring more information and demonstrations to interested editors.

Outside of the US, we have had the FCP Exchange event at IBC 2015 in Amsterdam. Now on the eve of the first presentation,  Jesús Pérez-Miranda tells FCP.co a bit more about how and why he has organised the first FCP Tour.

And of course if you happen to be in Madrid, make sure you go along!

I’ve been editing more than a decade, mainly broadcast TV shows but also on air promos, documentaries, corporate videos, short films, all kind of projects. I started in Avid, which is what I learnt in my Film School years along with flatbeds and linear tape-to-tape systems… Like most Avid editors, I was reticent to give Final Cut Pro classic a try, a software I really didn’t know much about until I actually started using it.

I joined the party in 2008 with Final Cut Pro 6, and soon I realized how many great things I was missing for no good reason. Besides being an eye-opening experience for me in terms of workflow and editing, it also opened new doors and opportunities in the industry that I couldn’t have accessed otherwise.

A bit later, FCPX came out, and like most professional editors, I didn’t think it was ready for prime time… But the more fuzz there was online about it, the more curious I became. On the other hand, I didn’t want to make the same mistake twice and dismiss a tool without actually learning about it first.

So I kept reading about it online, here on FCP.co and other sites, and the more I learnt about FCPX the more fascinated I became with its new paradigm and powerful capabilities. Then Apple released version 10.1 with the new Library structure, along with the new MacPro. For me, that was a real proof that Apple was focused on making its software and hardware a killer combination for the pro community. So I jumped in with both feet.

Of course, most editors and companies didn’t use FCPX, so except for the projects I cut at home, I kept editing on Avid and FCP7 in most paid jobs… After switching to FCPX metadata driven workflows and magnetic timeline, I found going back to the old track-based paradigm kind of painful.

So I tried to tell my colleagues about FCPX, but they didn’t want to listen. On one hand, there was the stigma that Apple didn’t care about professionals any more. On the other hand, the fact that most professional editors are reticent to learn a new tool, specially if it requires you to start from the beginning all over again. I guess it’s better the devil you know than the devil you don’t.

That was a bit discouraging at first. But instead of feeling pessimistic about it, I gradually started to see it as a great opportunity. If Apple didn’t want to serve directly the pro market, then someone else would have to do it. And if people didn’t feel like learning this revolutionary software on their own, then they would have to learn it from someone sooner or later. 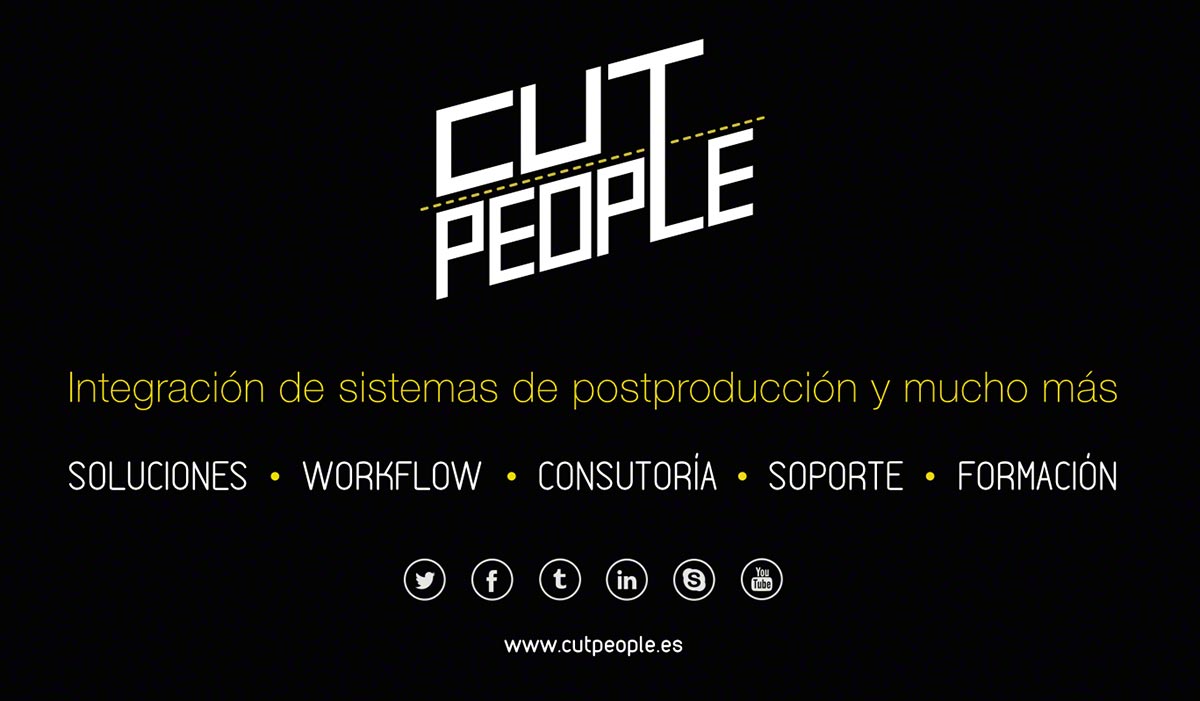 Following the lead of FCPWORKS in LA, I decided to create my own company in Madrid to serve those needs: Cut People. I already had several years of experience teaching editing courses (mainly with Avid or FCP7). And for quite some time I was expanding my editorial skillset with post-production consulting and coordination gigs as well.

So I guess transitioning into the workflow and integration business was a natural step for me. That’s how I ended up reaching out to Sam Mestman (LumaForge) and asked him if they were considering on expanding their operation into European territory. Lucky for me they were actually looking for resellers in Europe and they didn’t have one yet in Spain. Then, Sam put me in touch with Ronny Courtens (whom I already knew from the FCP.co forums) and that’s how all this started to become a reality. To this day, both of them have been extremely supportive and helpful in guiding me throughout this challenging transition. 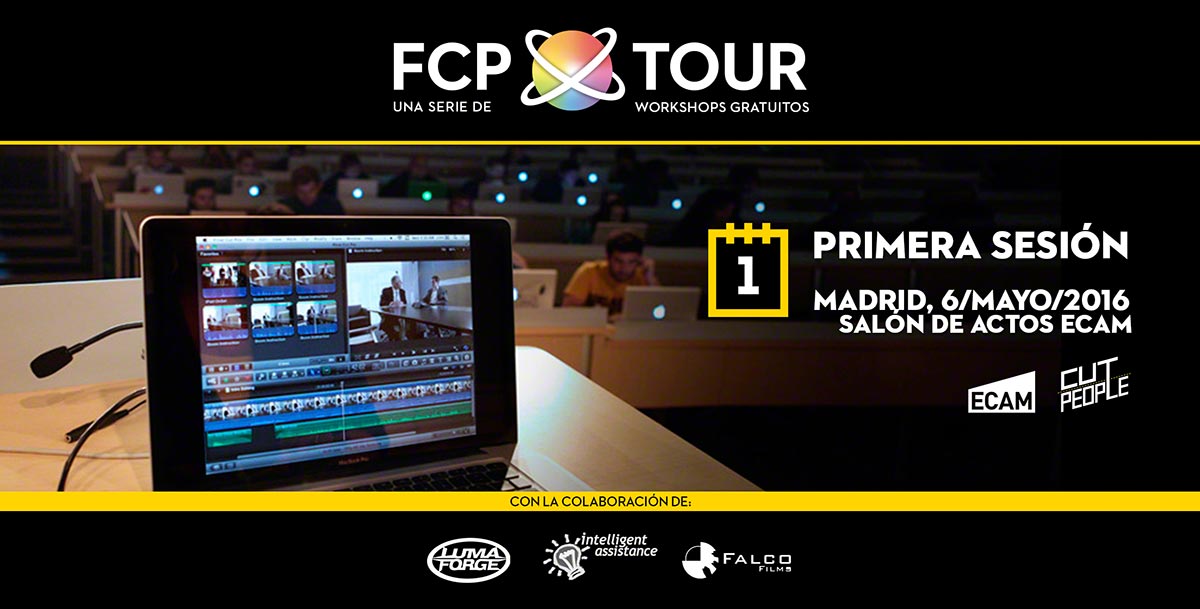 Now it’s time to get the word out and do something that helps people put you on the map. Like an event, or better than that, a series of events! I’ve always been jealous of all these Pro User Group meetings and workshops that always take place abroad. If I was lucky I could watch some of the presentations online, but I was never able to take part on any of them because of the distance. So the idea of putting together something like this in Spain has always been on the back of my mind.

And at this point, it made more sense than ever. I contacted the people at ECAM (the school where I graduated in Film Editing) and proposed them to co-organize a free workshop to showcase FCPX workflows for film, advertising and broadcast TV. They liked the idea so I finally had a great venue to host the First Session of the Final Cut Pro Tour: a film school auditorium with capacity for 160 people, and a great digital cinema projector. It’s funny how only 11 years after graduating in Film Editing there, I’ve evolved from using Avid and flatbeds to preaching FCPX to the choir inside those very same walls.  Time really flies!

For this first session, that will take place in Madrid on May 6, we have scheduled the following presentations:

• Introduction to the Final Cut Pro X ecosystem, a presentation that I will be doing myself.

• Feature Film Workflows with FCP X, where I will be showing the Shot Notes X and Sync-N-Link X workflow that I designed for an upcoming Mexican-Spanish feature film.

I’m still amazed that Ronny Courtens is willing to travel to Spain to help me put all these together. We actually met in the FCP.co forum, an invaluable resource that not only allows you to learn from others, but also to connect with colleagues you share interests with, no matter which part of the world they are from. It’s kind of crazy that we are actually doing a presentation together in a few days in Madrid.

Also, I am very grateful to Sam Mestman and all the LumaForge team for sending me a JellyFish 4K unit for the demo (all the way from LA to Spain!), especially after the incredibly busy NAB they just had.