When Anders Utterstrom watched the opening ceremony of the 2016 Olympics from Rio, he had an idea. Could he recreate the Anthony Howe kinetic sculpture that accompanied the flame? Time to start experimenting with Apple's Morion and 3D objects!

After the Rio Olympics opening ceremony, the thought came: “I wonder if I could re-create the backdrop for the Olympic flame in Motion?”

This is the story how I turned a bullet point • (option-8) into this:

This is not a tutorial nor a step-by-step guide. The project grew out of passion and the path to completion was not without challenges. It is more of a description of my approach. Hopefully, it can serve as a source of inspiration as to what can be done with 3D Text in Motion.

I started out using a bullet point, and increased the size to 1000. I changed it to 3D and twirled down the front- and back-edge arrows, and tried to create a 3D sphere.

After discovering how the different controls affected it by trial and error, I managed to create a semi-decent sphere. 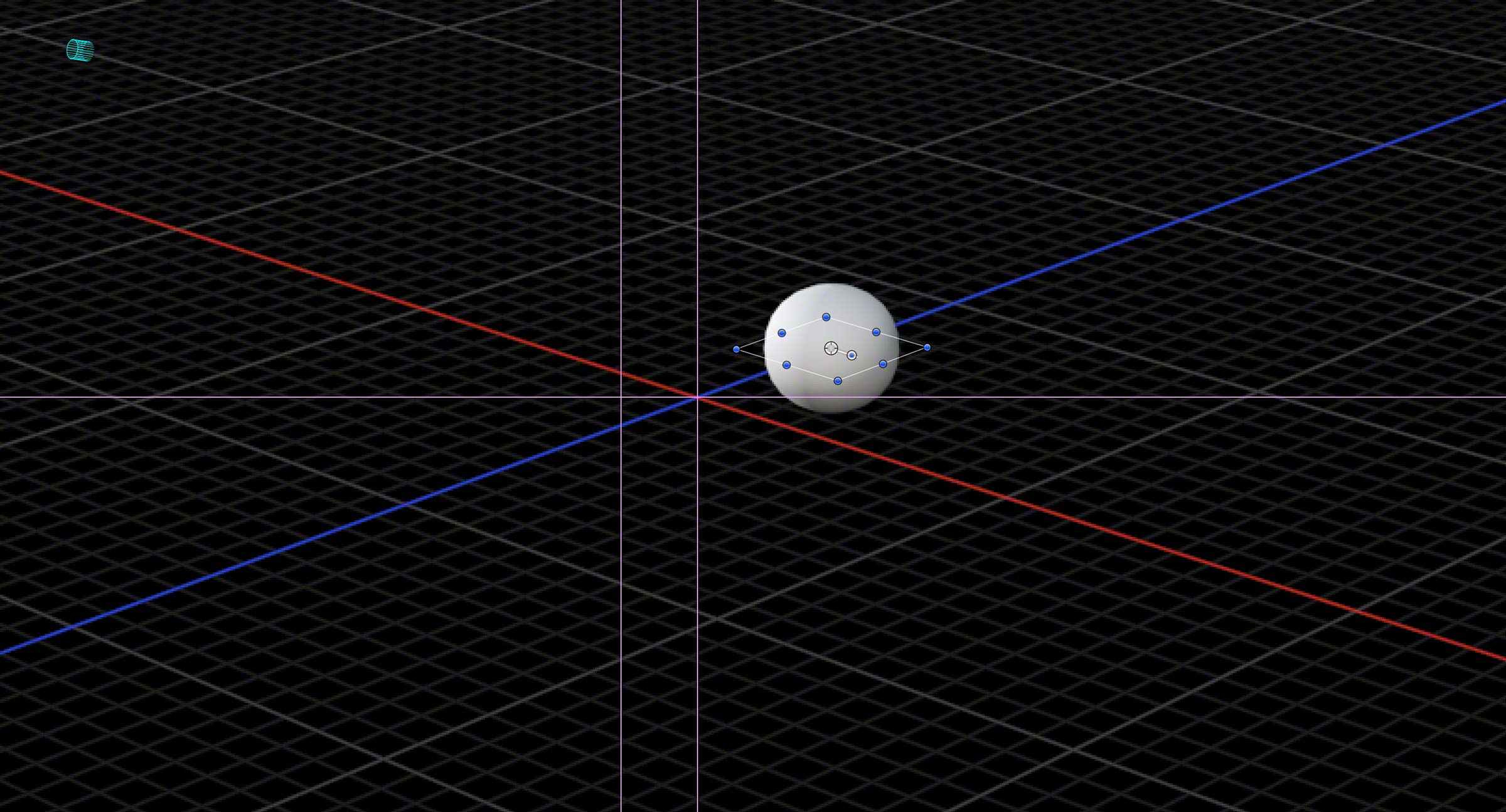 Next I made 3 duplicates, then started creating the smaller spheres.

I found out the hard way that there is no fixed relationship between different fonts or how to center a bullet point and create a sphere.

Eventually I created the 3 spheres by duplicating and scaling them. This is a much better method than creating a new one from scratch. The largest is at 100%, size 400, the others are at 75%, 50% and 25% respectively, with front- and backside values as below. Make sure that the front and back ends are set to round.

This will save you time, as creating a new sphere in a different size is pure hand-sculpting. Set the front and back ends to round on your largest bullet point and start adjusting. Also, set the depth of the 3D font to zero. Otherwise, you will inadvertently end up with a sphere resembling a pill. 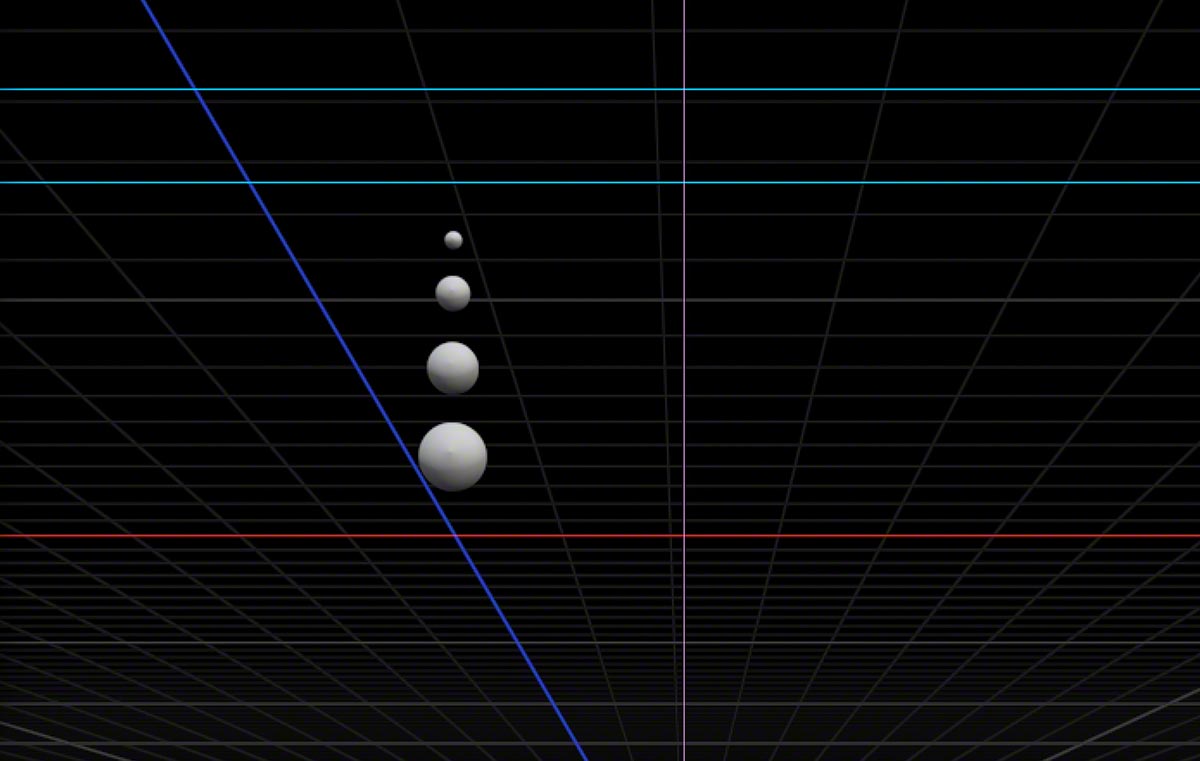 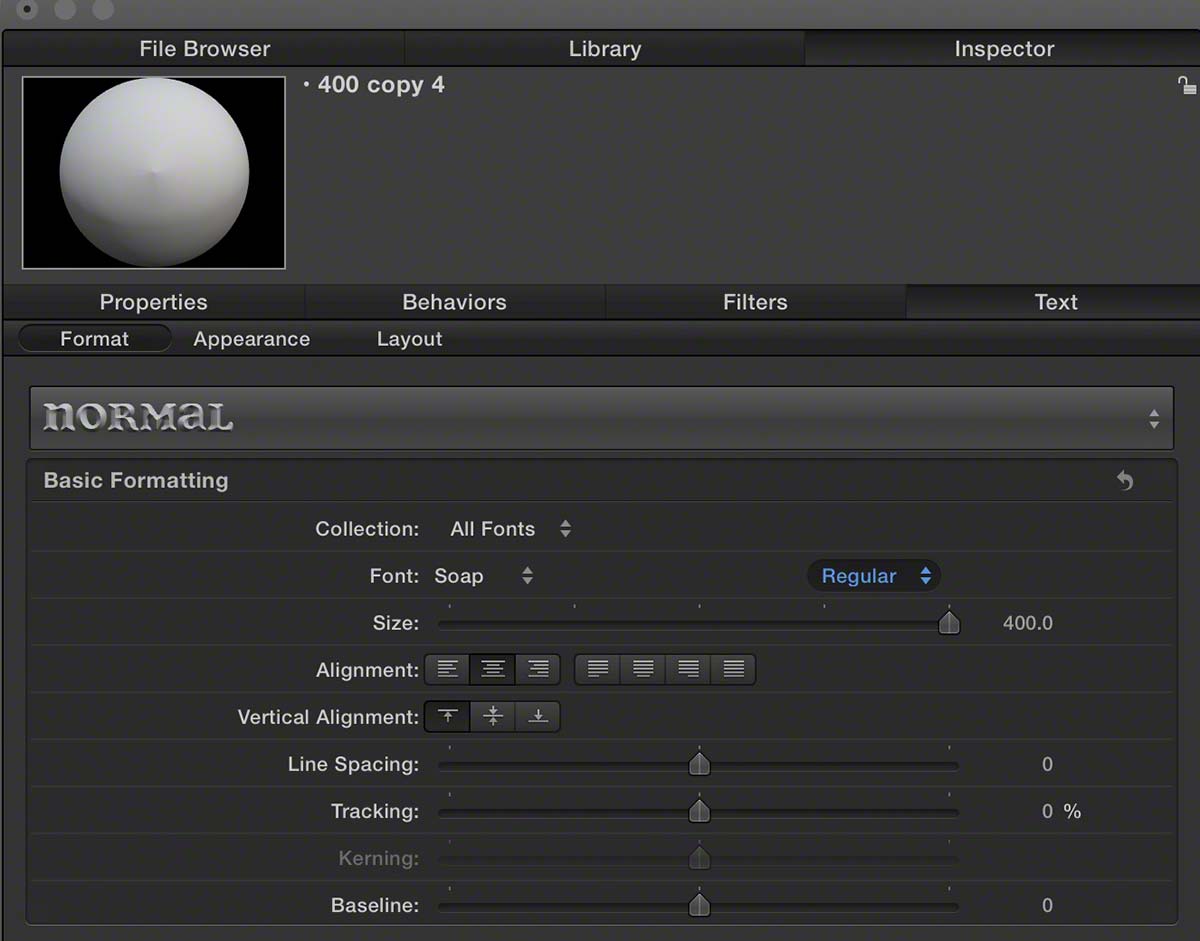 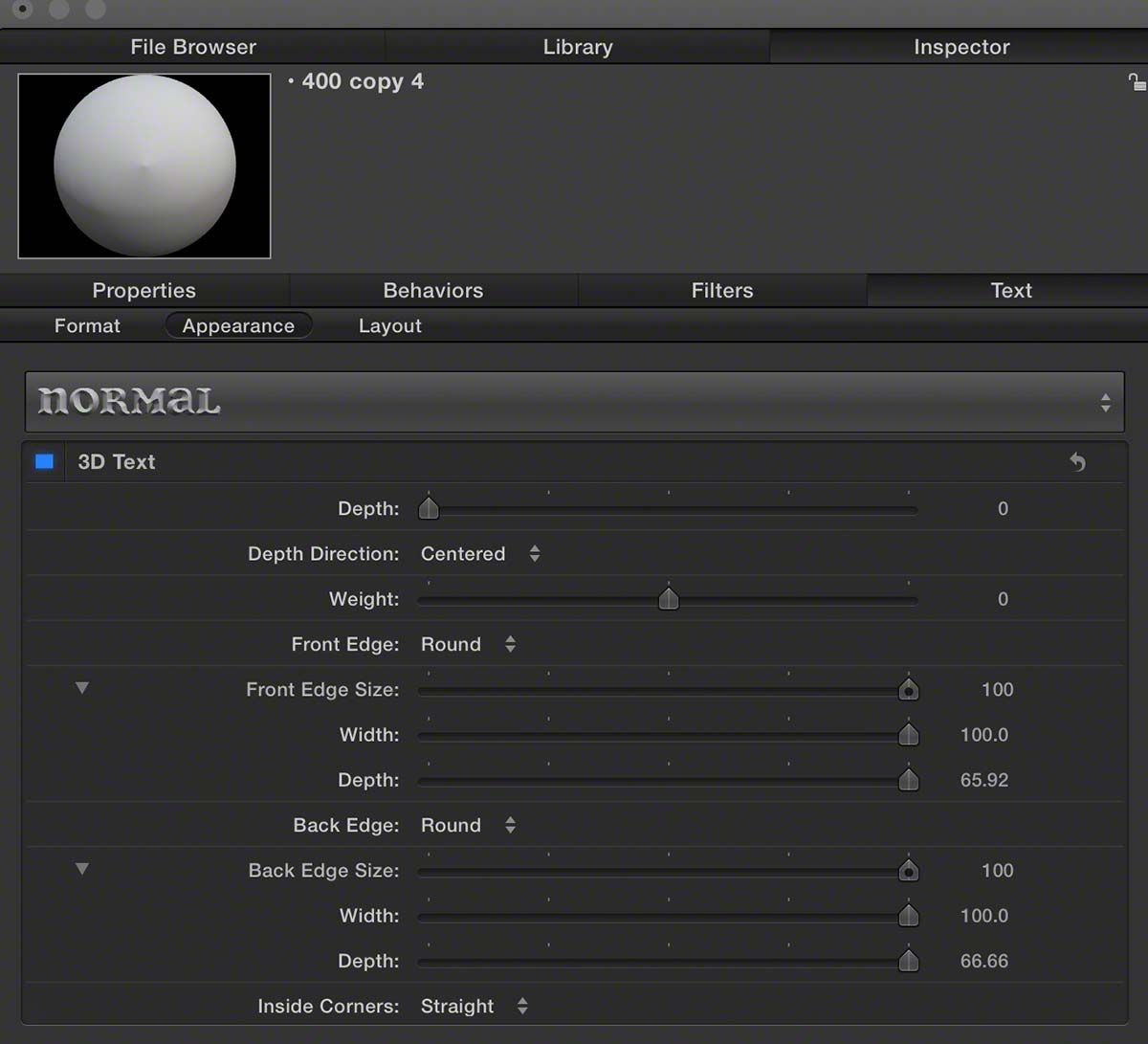 Next I figured that I needed something resembling a paddle attached to some type of stem. The stem would be attached to the paddle and go through the spheres and end up attached to a cylindrical/flange-looking connector.

To create the stem, I used another • and increased the depth to 1300 with one end set to round and made a little pointy, while the other end was set to straight.
The Paddle was at size 600 with round edges.

The Connector looks like a piece of water pipe extension. The connector consists of four pieces and was created just like the stem.  I made one and duplicated it, and adjusted the size and depth. The Connector layers were placed in a Layer Group. 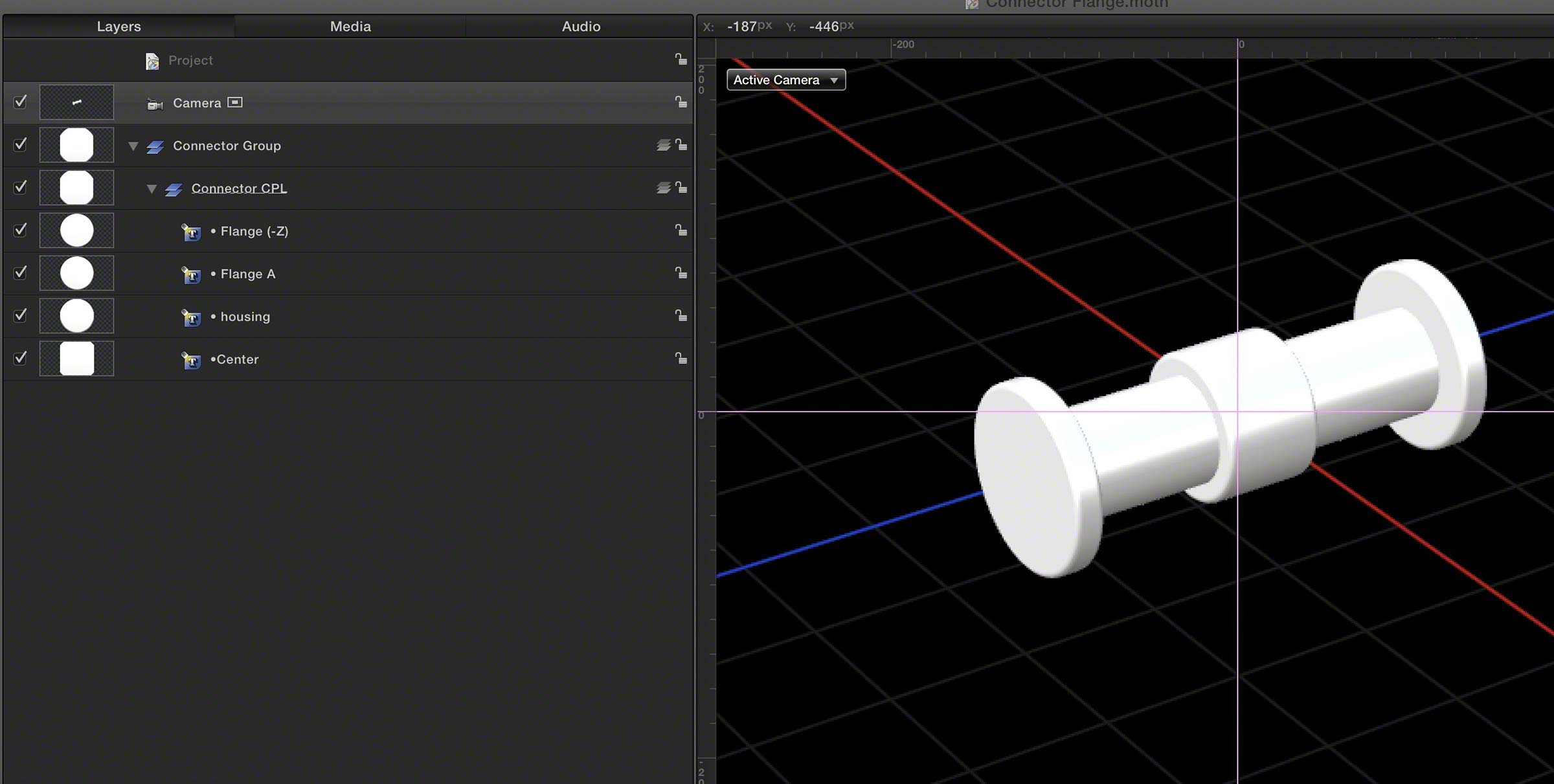 I now had four spheres, one stem and one connector.  The fact that I had come this far made me really excited.

I knew that 3D text was the way to go, with all the materials, reflections etc. that come with it. Especially since I had been able to create these simple 3D objects with just a •.

It’s a bit tricky to assemble the first items into what I call an alpha-numeric layer group Blade.

To complicate things, I needed four Blades attached to one single center connector. Each connector has four blades, and they are configured in a circle, and should be spinning.

Someone clever once told me to break a complicated problem down into smaller pieces. There are several YT videos of the Rio opening ceremony, and I really studied the mechanics of this backdrop in depth.

It was time to think about a color scheme.  I used metal/gold for the paddle, stem and spheres, with some textures for the connector.

I duplicated the Blade group so I had a group consisting of four Blades and a Connector. Using a properly positioned anchor point, I rotated each Blade group around the center of the Connector.

To try a single segment out, I added a spin behavior, and the propeller began spinning and wobbling in all axes. Hilarious!

To avoid this, make sure the Segment Group anchor point is in the center (x,y,z). Then apply the spin behavior to the group. You will also need to explore the Axis: Custom settings.

Each segment had to be duplicated and rotated every 15˚, while at the same time making a second 15˚ rotation in a perpendicular angle.  This part is tricky as it also requires an x,y transform move. 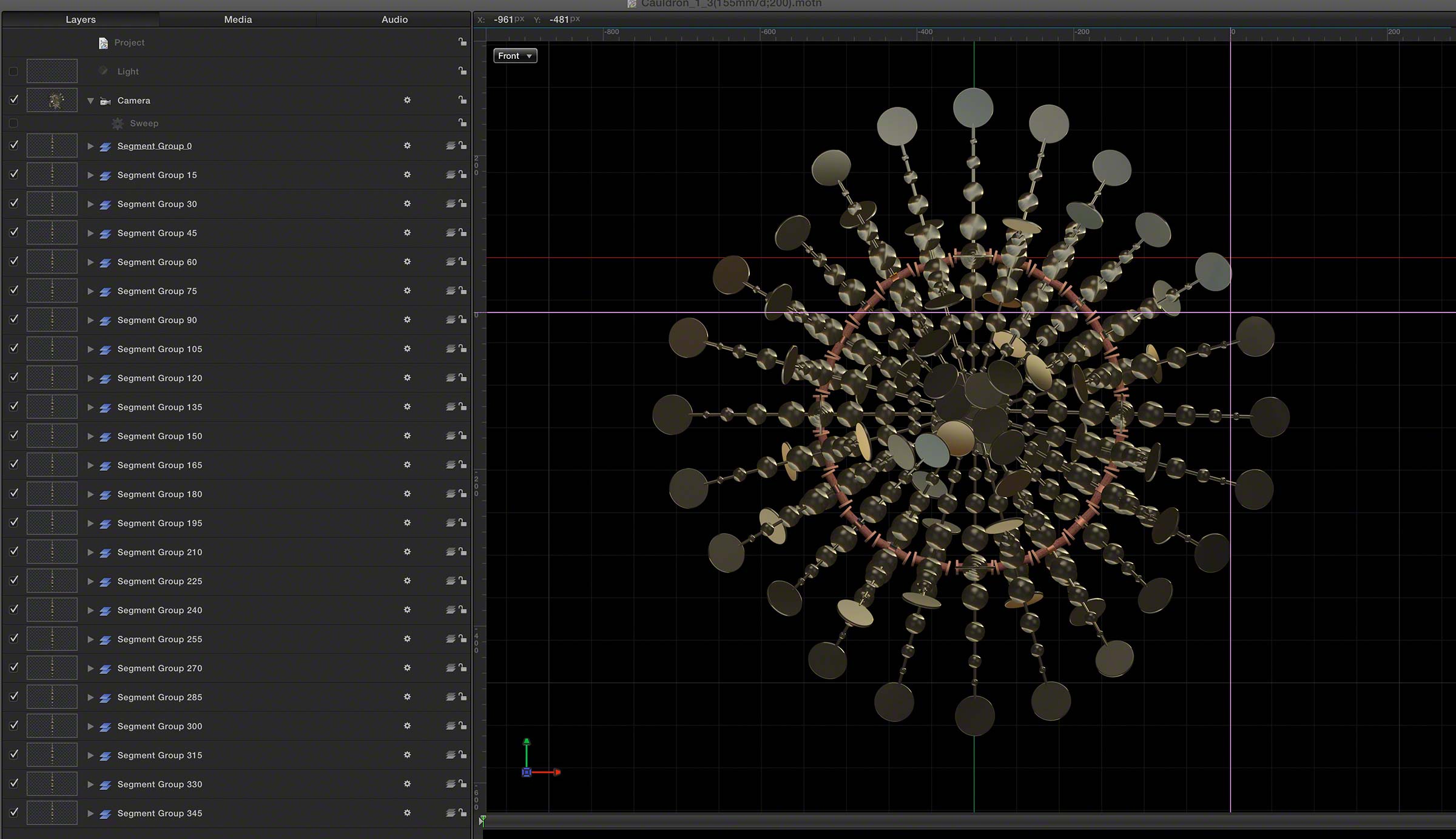 As you go along and create new Segments add the Spin Behavior you can use a spin rate of -36˚ or 36˚ depending on how you built your project and how you duplicated your Segments, in relationship to the x,y and/or z-axis.

Also, where the Segments are located in relationship to the origin of the project makes a difference. An example of the settings I used is provided below. If you are not familiar with latitude/longitude settings, I do recommend you to read up on this in the Motion manual. Try different settings to learn their effect using the Spin Behavior.

Suggestions:
•-36˚/36˚ will give you a full revolution for a 10 sec project.
•The paddles and/or the connector might need to be rotated 90˚.
•Use one connector for each segment
•Turn off unused segments to keep Motion snappy while you are testing things out.

For this step, I used the front/perspective view, with the z(Blue) axis pointing right at me. Next create a duplicate of the Segment, rotate it around the z-axis 15˚ and around the x-axis 15˚.

Then perform a transform in x,y to start making the circle of segments. 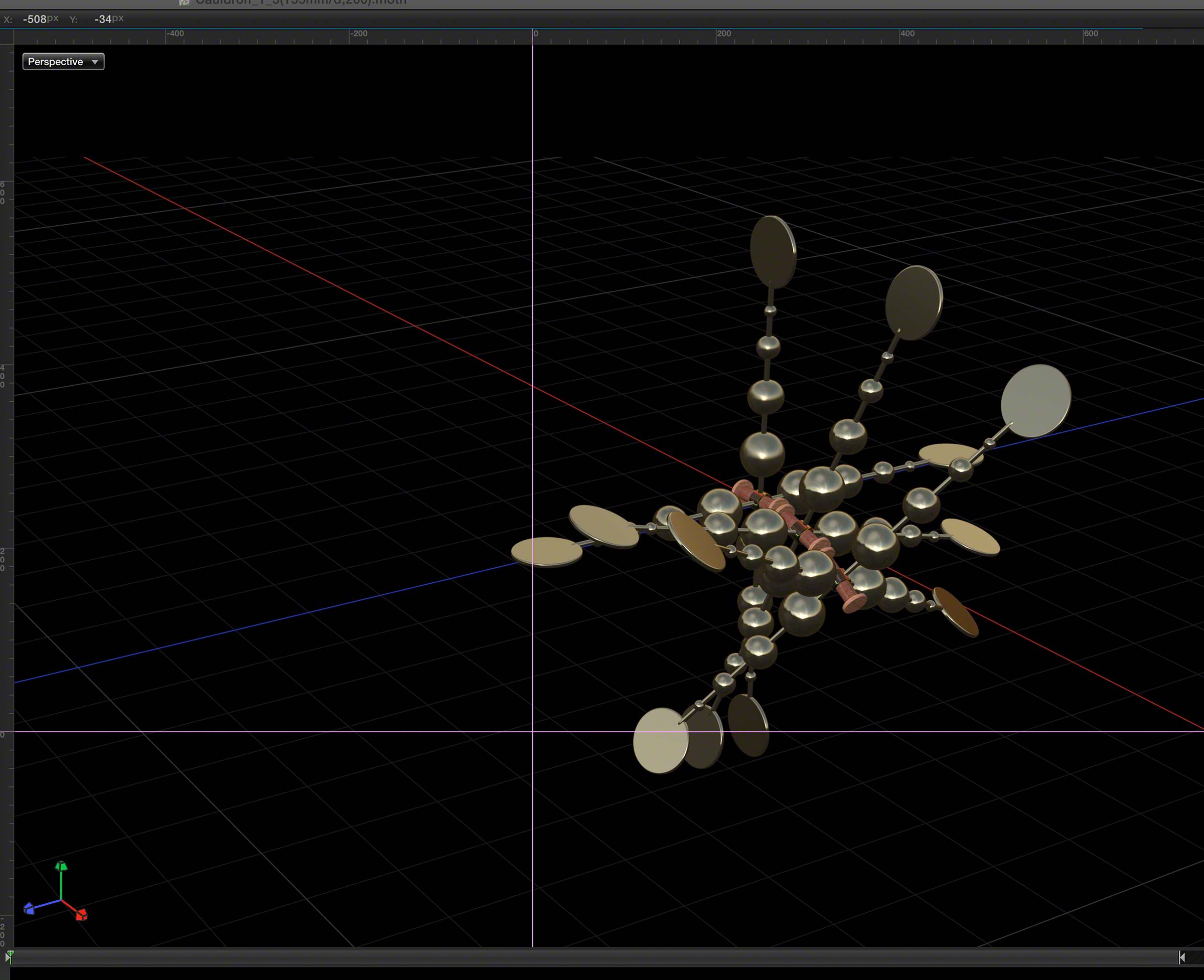 For each segment, an offset of 15˚ rotation around the Connector centerline is necessary. Otherwise the Segments will be spinning, using the same “start”-point.

This is pretty much it.  I added an orange light with high intensity and a camera sweep along with some depth of field blur, and framed the project with the focal length of the camera.

The actual time it took to create this project wasn’t that long. I didn’t keep track of the actual time I used Motion. It required more time thinking on how to approach a certain next step than actually finish each step.

Personally, I have gained a lot of respect for what can be done with Motion. I’m already thinking about a few new projects. Maybe putting this idea to work in a VR/AR 360˚-video composition?

I learned a lot about using Motion throughout this project, but realized that I could have used a different approach. The 24 segment groups could probably be placed in a “Master” group with a sphere as a center point to be turned off later. Together with a known radius and some trigonometry, I could have calculated the x.y transform point for each segment. Instead I did it manually, so everything is not perfectly precise.

To conclude, here’s an image of me playing with the focal length of the camera. 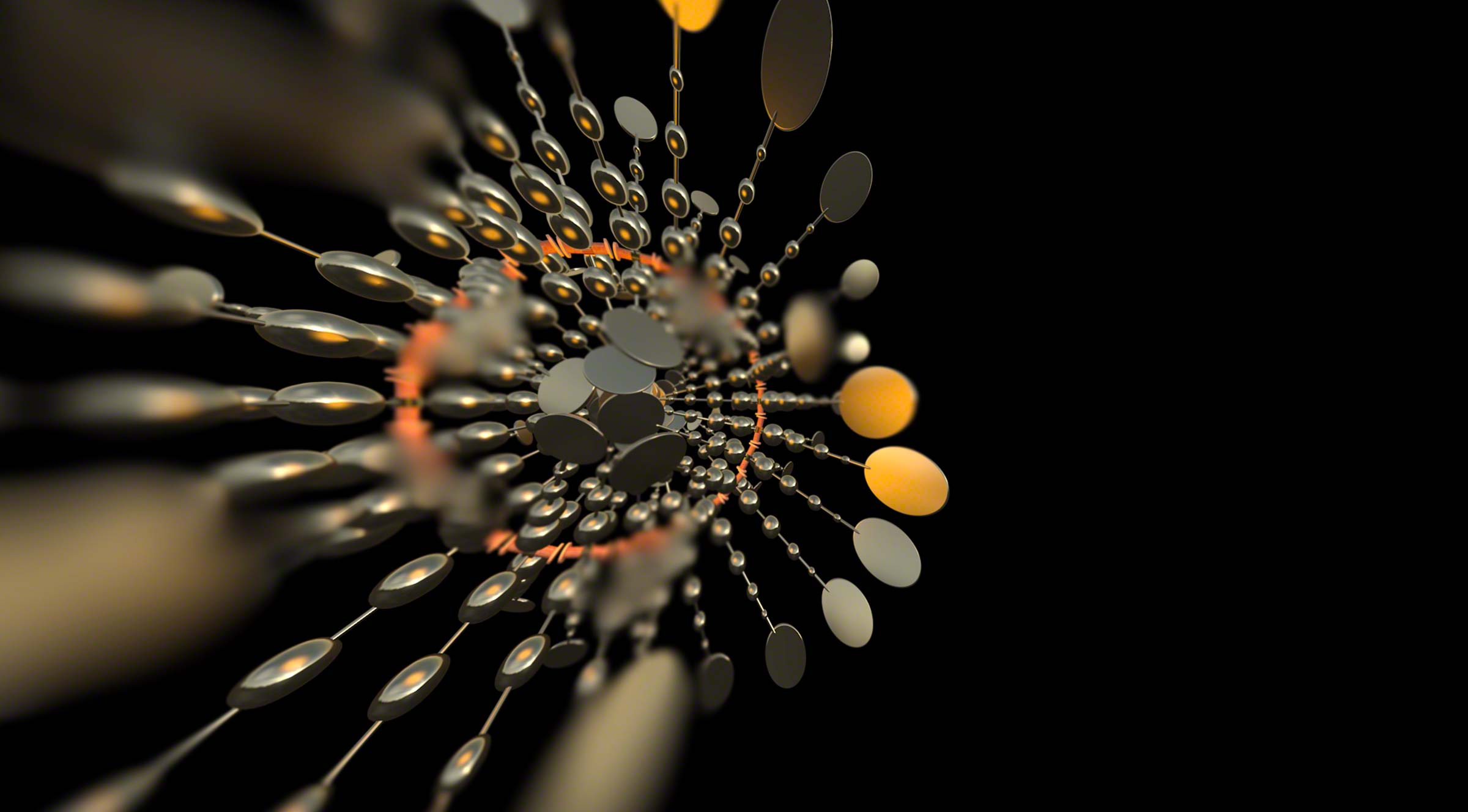 I would like to take this opportunity to especially thank Mark Spencer and Steve Martin of Ripple Training and Fox Mahoney for his recently posted Motion tutorials on fcp.co. 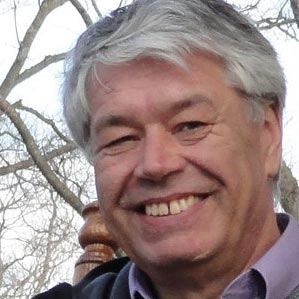